Slesse, East Face Attempt (or why Sean Easton is badass)

On Wednesday through Friday Dylan Johnson and I made an attempt on Slesse's East Face route. Established in July 1997 by Sean Easton and Dave Edgar, the East Face of Slesse is most likely the hardest route in the Cascades, and like most of the Cascades hardest routes (pretty much all the rest were established by Pete Doorish), it remains unrepeated, despite several subsequent attempts. The most recent attempt was by Squamish climbers Will Stanhope and Andrew Boyd, who decided after 3.5 pitches that the rock quality wasn't up to snuff for their free-climbing ambitions. Dylan and I similarly made it only a whopping 7 pitches up the wall. Hat's off to Sean and Dave for climbing this beast! (And for those who aren't familiar with it, check out the 2003 AAJ for another Sean Easton route, Blood from the Stone, which, in my opinion, is the best route ever climbed in Alaska).

The mighty eastern walls and buttresses of Slesse, from the trailhead: 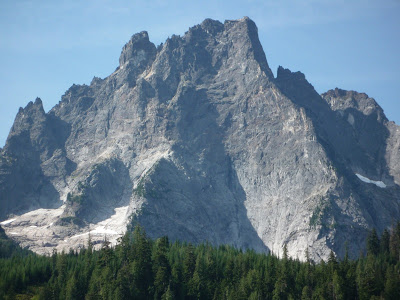 Dylan on the polished granite slabs of the Pocket Glacier cirque: 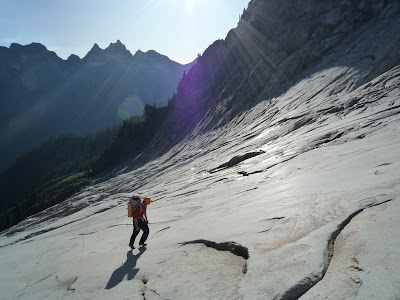 Further up the slabs, with the East Face directly above: 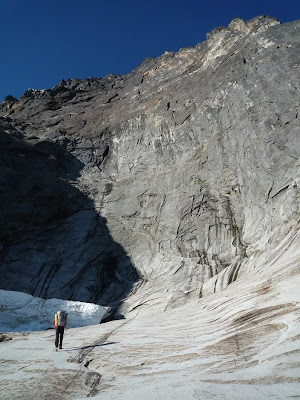 Dylan starting up the second pitch: 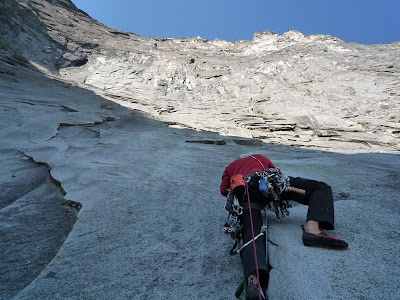 And starting the fourth pitch, which gained a bivy terrace: 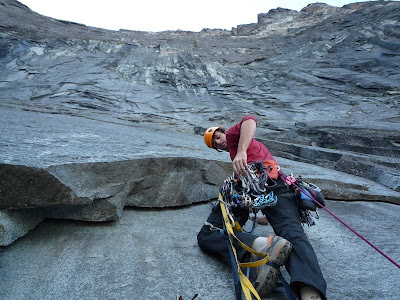 After arriving at the bivy terrace, I headed up the most obvious feature above, which we thought to be the route. I led and fixed one long pitch, which was the hardest aid pitch I've ever led (a scary basalt dyke), then returned to the terrace for the night's bivy: 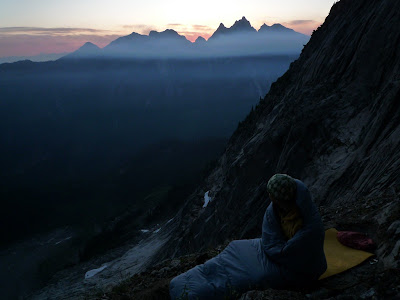 Colin jugging back up the fixed pitch the following morning: 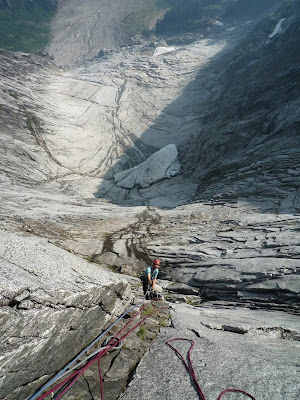 I led another aid pitch up the basalt dyke feature, which turned out to be technically easier than the first, but even more terrifying. After gingerly negotiating many loose obelisks of basalt directly above Dylan's belay, I finally found an anchor worthy of lowering off of, and headed back down. Starting up this scary pitch: 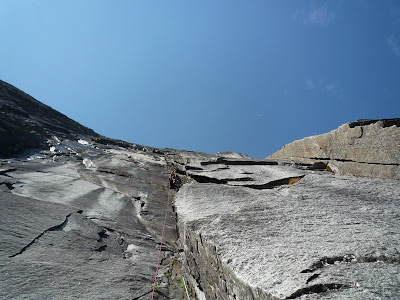 Realizing we were off route for sure, we rappelled back down to the bivy terrace, and decided it was time to bail (although on our way down we found where the correct route continues, on a much less obvious feature, but on better rock): 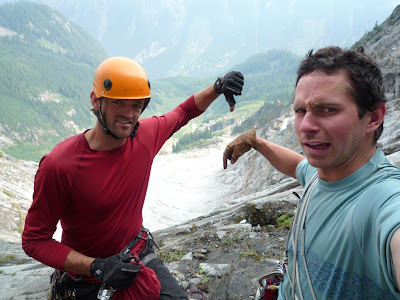