Last Wednesday afternoon I took a late cabin up the Aiguille du Midi telepherique for an attempt on Supercouloir the following day (April 27). Supercouloir is an 800 meter ice gully route on the east face of Mont Blanc du Tacul. The direct start to Supercouloir was not formed, so I took rock shoes, with a plan to do the Gervasutti Pillar start.

I left the top of the Aiguille du Midi at 5am Thursday morning, and walked down the Vallee Blanche to below Tacul's east face. After some shenanigans with the bergshrund and looking for the best place to get on the rock, I finally started climbing up the Gervasutti Pillar. Unfortunately it had snowed a few centimeters overnight, and most of the holds had snow to brush off, which didn't start melting until I was almost done with the rock climbing. And regardless of the snow, the climbing on the Gervasutti Pillar start was harder than I expected, so I ended up using at least some sort of self-belay on 75% of it, and also using up much more time than I had expected.

Looking down from a few pitches up the Gervasutti Pillar start: 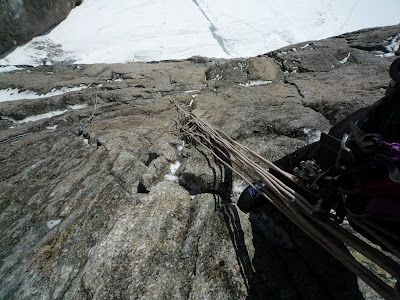 I started the ice gullies in Supercouloir proper later than I would have liked, but fortunately the route was going into the shade just as the air temperature was beginning to rise. I also self-belayed the first pitch of the gullies as it was a bit thin and mixed. Looking down from a couple pitches up the gullies: 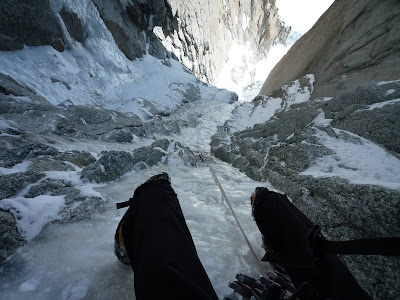 Looking up the steepest pitch of the gullies, which has a couple vertical steps: 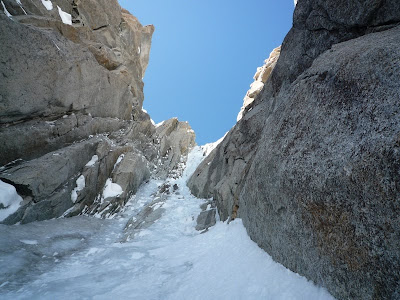 Although known as the "crux" pitch of the route, the steep pitch felt much easier than the Gervasutti Pillar start or the first, mixed pitch of the gullies, and I felt comfortable free-soloing here: 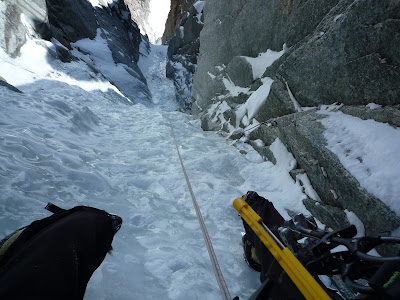 Looking real funny (from the altitude perhaps?) above the steep pitch: 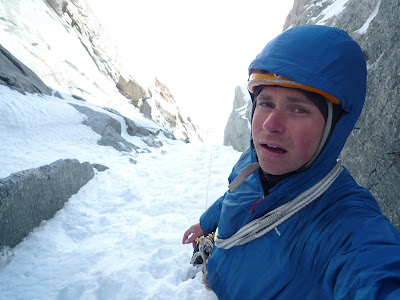 Looking down from where Supercouloir joins the upper Gervasutti Pillar. The Grand Capucin and Tour Ronde look pretty small from up here! 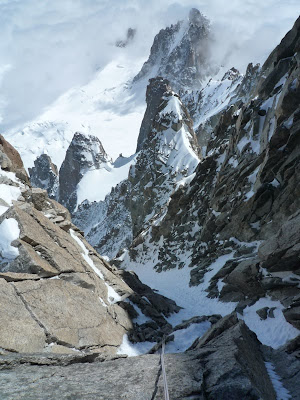 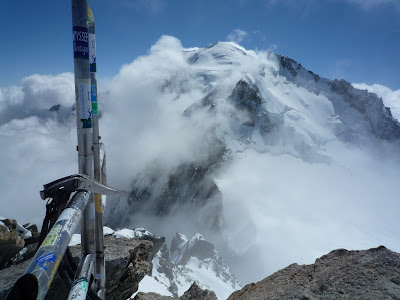 When I was planning this solo my friend Korra teased me for planning it so cautiously, saying "You've already soloed the other Supercouloir [on Fitz Roy], so I think it will be no problem!" But the difference between soloing a route you have done previously and soloing a route on-sight is very big. Having never been on it before, soloing the Supercouloir on Mont Blanc du Tacul felt fairly difficult and serious. Of course nothing like Fitz Roy, but perhaps an equivalent experience to my solos of Aguja Poincenot and Aguja Mermoz (which are more serious routes overall, but that I had climbed previously before soloing them).

There were several warm, sunny days before and after my day on Mont Blanc du Tacul, and I did some mellow alpine rock climbing: The Contamine Route on Pointe Lachenal with Andy Houseman, the Rebuffat Route on the south face of the Aiguille du Midi with Miles Smart, and the route, "Glacier Police," on Pointe Adolphe Rey with Mike Pennings. I only brought a camera on Pointe Lachenal, but here is Andy on the Contamine Route: 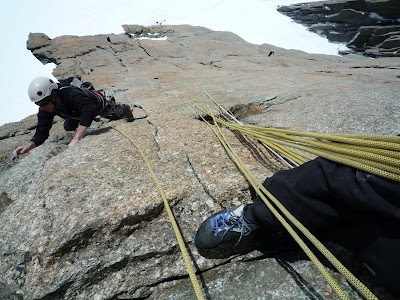 And a french party climbing a 7A face route to the left of the Contamine: 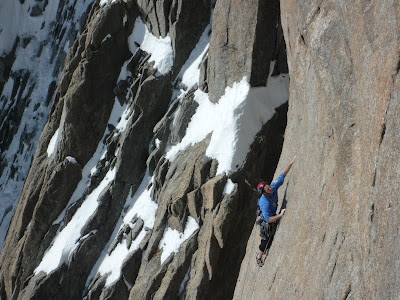 And for reference, here is a nice photo (not mine), which shows Supercouloir, Pointe Lachenal, and Pointe Adolphe Rey (but not the South Face of the Aiguille du Midi): 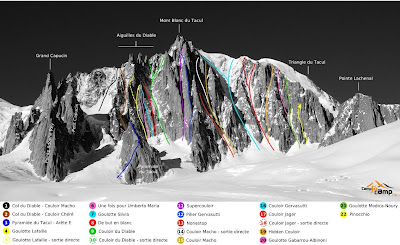