This summer season in El Chalten has been exceptional in many ways, and the past few weeks in particular have been the craziest I've ever experienced in Patagonia.

Immediately after Jorge and I climbed Torre Egger, my girlfriend, Sarah Hart, came down for a visit of a couple weeks. She unfortunately came down for the worst weather period, and we spent most of her visit bouldering and sport climbing, but still made it up into the mountains on a couple occasions.

On the first day of 2012 Sarah and I went and climbed the normal route on Cerro Solo, with weather better than had been forecasted. Cerro Adela and the Torres on the dawn of 2012: 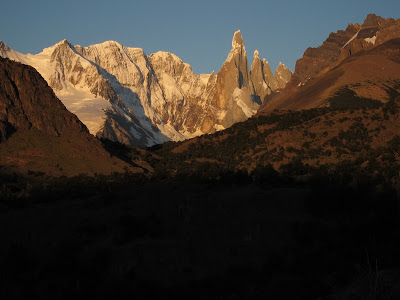 Sarah climbing up to access the upper glacier on Cerro Solo, with the Torre Massif and Fitz Roy massif behind: 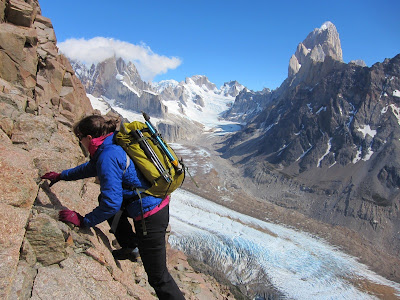 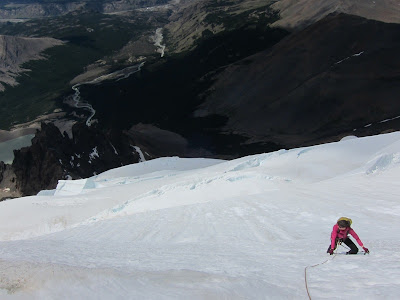 After Cerro Solo another weather window appeared in the forecast, and Sarah and I went to try the east pillar (aka Red Pillar) of Aguja Mermoz. Sarah climbing up to the base of the Red Pillar, with a beautiful sunrise over Paso Superior: 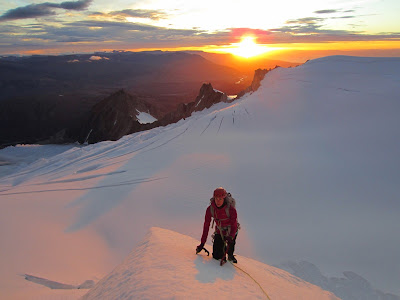 The weather window turned out to be mostly false, and only a few pitches up the Red Pillar it began to rain. Sarah following the first high-quality pitch of the route, and the last that we climbed before turning around: 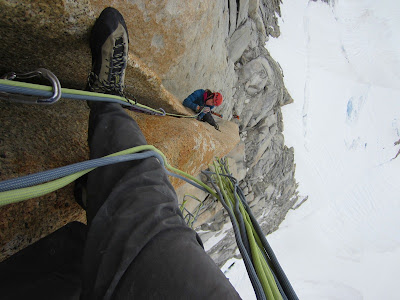 Sarah rapping over the bergschrund at the base of the east face of Mermoz: 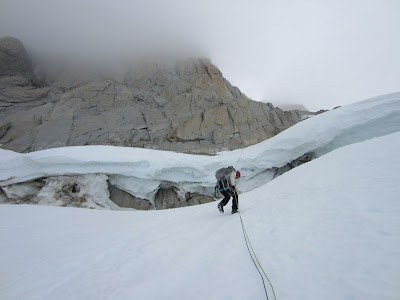 Recently there has been a whole bunch of good weather here (too much, in fact - and the mountains are falling apart, with huge amounts of spontaneous rockfall), although for me it has been mostly unproductive in terms of climbing. There was a tragic and fatal accident on Aguja St. Exupery, in which Canadian climber, Carlyle Norman, was killed. During the only recent stormy weather, I went with Rolando Garibotti, Jorge Ackerman and Pep Masip in an attempted rescue mission. Climbing in high winds, at night, while raining and snowing, we weren't able to reach Carlyle's position high on the tower. We'll never know whether or not Carlyle was still alive while we were trying to reach her.

The physical exertion from our rescue mission, combined with the psychological strain of knowing a fellow climber had just died, took the wind out of our sails, and we passed a couple days of perfect weather in town.

Finally, the day before yesterday I climbed Aguja Desmochada with Rolo Garibotti and Doerte Pietron via the Golden Eagle route, with a bunch of extra weight on our backs. 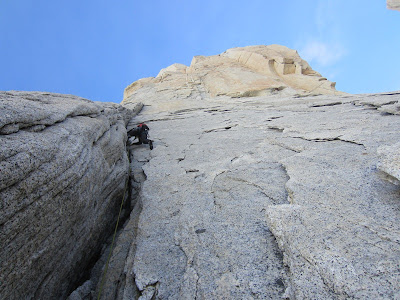 Doerte jugging with a heavy pack during Rolo's lead block: 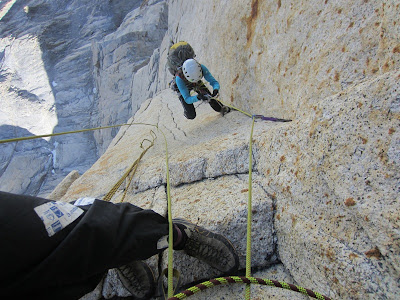 Rolo coming up to my belay a few pitches below the summit of Desmochada, with the Torres behind: 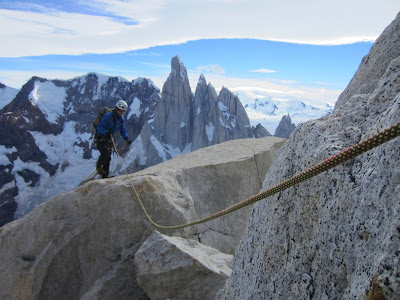 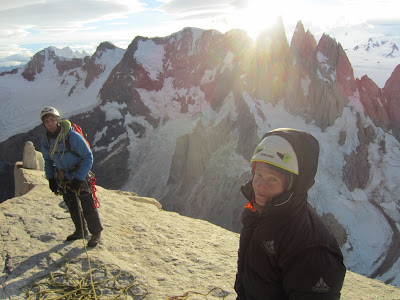