After Sarah and I had rested from Fitz Roy, we unfortunately squandered several more days of good weather. However, this weather window turned out to be longest I have ever seen here in El Chalten, and I had yet another chance to go climbing. Sarah headed to Bariloche to start an intensive Spanish language course, and I teamed up with fellow Seattle climber, Chad Kellogg, for another crack at Cerro Torre. Chad had just made back-to-back attempts on Cerro Torre's Southeast Ridge with another friend from home, Jens Holsten. We waited in town for Chad to get two full rest days, and then hiked up to Norwegos on the 23rd.

I first met Chad when I was sixteen years old, at a dinner gathering at our friend Andreas Schmidt's house. Despite having been friends for over a decade, Chad and I had never climbed together before, apart from a few belays at the crag and climbing gym, and a few ski touring days. So, as we organized our equipment and strategy, we also got to know each other a bit better. Our plan was to attempt the "Corkscrew" linkup, which climbs up most of Cerro Torre's southeast ridge, then crosses the upper south face on a hanging icefield, and finally follows the Ragni Route to the summit. This linkup had been discussed for decades before it was finally completed in 2008 by Norwegian climbers Trym Atle Saeland and Ole Lied. Trym and Ole had planned to climb the "Salvaterra variation" on the southeast ridge, but finding it covered in rime ice, settled to use the 90-meter Maestri bolt ladder to the right.

On the 24th Chad and I got a leisurely start, and had a slow, relaxed day climbing from Norwegos to the Col de la Patienca, at the base of the Southeast Ridge. On the 25th we left all our bivouac equipment at the col, and departed at 2:00am with just daypacks. The rock was incredibly dry (in fact, the conditions in the mountains here were the driest I have ever seen - even more so than last season), and we made fast progress, starting up the Salvaterra Variation at first light. As is common practice for greatest efficiency, we divided the leading into two large blocks based on our skills, so I led all the rock on the Southeast Ridge, and Chad would take over on the Ragni Route. Not only did this allow us to lead pitches fastest, but we were also able to save weight, by bringing only one pair of rock shoes.

At the top of the Salvaterra variation Trym and Ole had made one rappel to access the hanging icefield on the upper south face, but we found we were able to traverse onto it easily, and reached the Ragni Route in two long simul-climbing pitches. It was cool to be on a seldom-visited aspect of the mountain, and it was also cool to see a few relics from Infinito Sud, Ermanno Salvaterra's epic journey on the south face. Upon joining the Ragni Route, at the top of the feature known as "El Elmo," Chad took us swiftly up these classic ice pitches. It was getting late in the afternoon though, and I was worried that the last, crux pitch would start turning to slush in the full sun. Thus, when Chad needed a short break to re-fuel at the base of the last pitch, I took one more lead, simply to make sure we got up the last pitch before it got any softer.

We reached the summit just before our Slovenian friends Luka Krajnc and Tadej Krišelj, who had made the third fair-means ascent of the Southeast Ridge, and got to high-five at the base of the summit mushroom! The rappels down the Southeast Ridge went as smoothly as can be expected, but of course we took our sweet time to not get any ropes stuck, and, as is par for the course, spent most of the night rappelling. At 1:45am, just under 24 hours after departing, we returned to the Col de la Patiencia, and spent a few hours eating, drinking and chatting with Luka and Tadej. As the sky began to grow light on the 26th we got on our way again, finishing the rappels down to the glacier, and slogging down the glacier to Norwegos, where we took another short break. Down at Niponino we finally stopped to sleep a couple hours, but then hurried off to town while the fantastically-long weather window finally began to break down.

Chad and my climb gets the distinction of being the first "fair means" ascent of the Corkscrew, but since I know Trym and Ole personally I am 100% sure that they would have had no problem doing it without the bolt ladders as well if they had experienced such phenomenal conditions. Also, it is worth noting that in the last couple of weeks preceding our climb, the Corkscrew had seen two attempts by Thomas Meling (NO) and Joel Frans (SE). They had attempted to link the southeast ridge directly into "Directa Huarpe," a variation of the Ragni Route that was established just earlier this season. This would for sure make a more difficult and more aesthetic version of the Corkscrew, that is a worthy objective to be finished.


Evening light on Fitz Roy and Poincenot from our bivy at the Col de la Patiencia. Photo by Chad Kellogg: 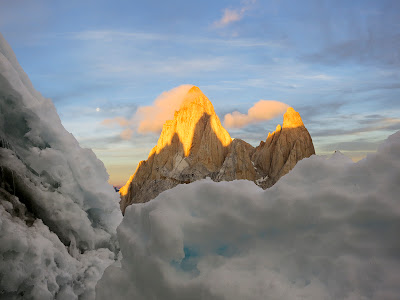 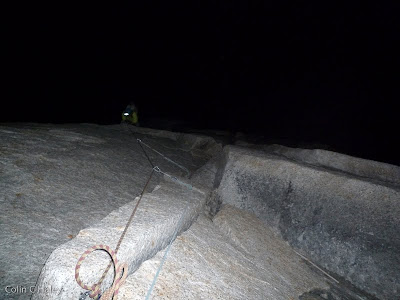 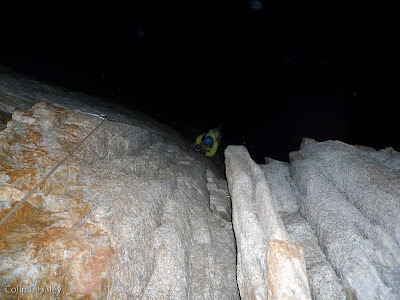 Chad nearing the base of the Salvaterra Variation at first light: 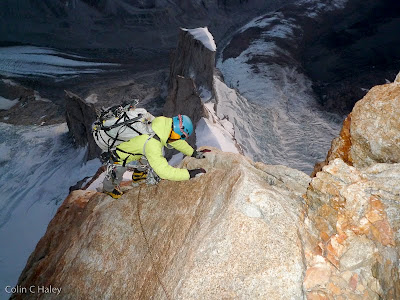 Colin leading the A1 first pitch of the Salvaterra Variation at first light. Photo by Chad Kellogg: 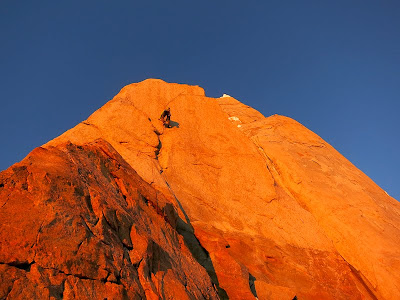 Chad nearing the top of the A1 pitch, with Torre de la Medialuna and El Mocho far below: 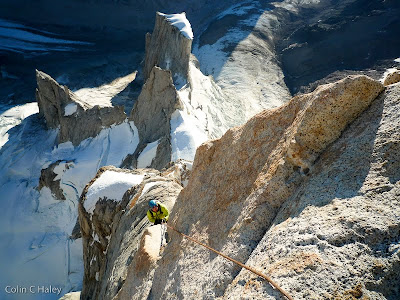 Chad nearing the top of one of the arete pitches on the Salvaterra Variation: 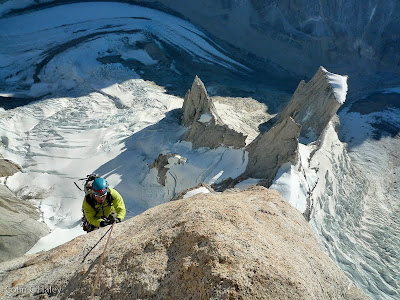 Chad at the top of the Salvaterra Variation: 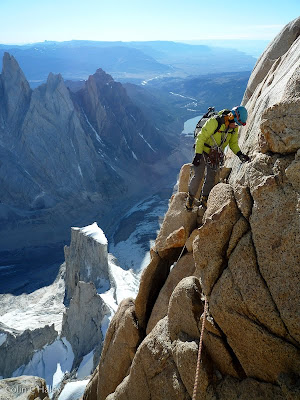 Colin traversing across the hanging icefield on the upper south face. Photo by Chad Kellogg: 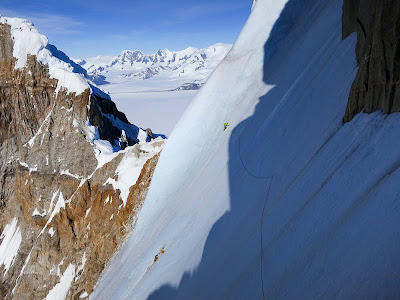 Chad traversing across the hanging icefield on the upper south face: 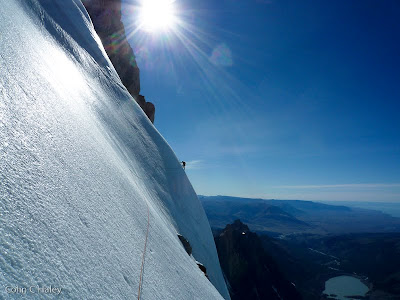 Chad further across the south face: 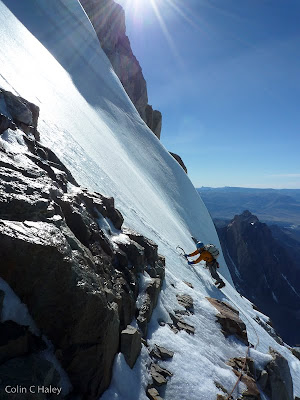 Chad starting the second simul-climbing pitch across the south face, with Cerro Adela Norte to the left: 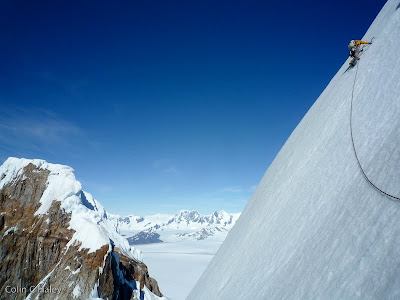 Chad leading the super-classic headwall pitch of the Ragni Route: 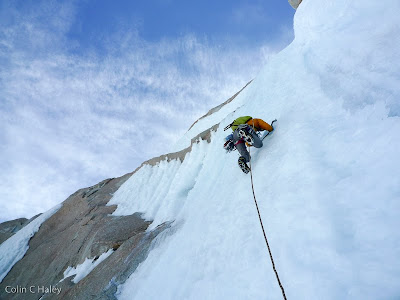 Colin jumaring the top of the headwall pitch of the Ragni Route. Photo by Chad Kellogg: 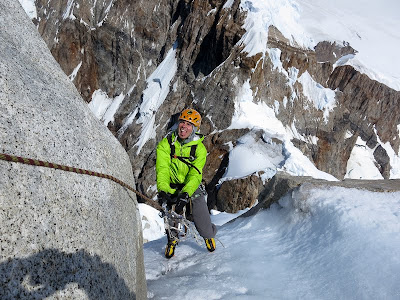 Chad starting up the third-to-last pitch of the Ragni Route: 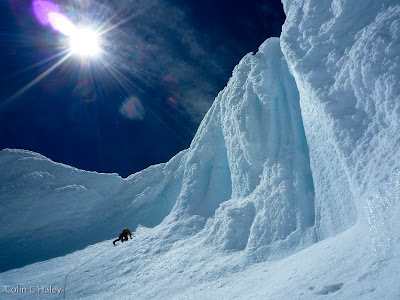 Chad leading the second-to-last pitch of the Ragni Route as it began to get slushy: 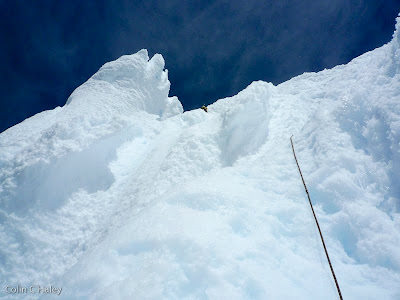 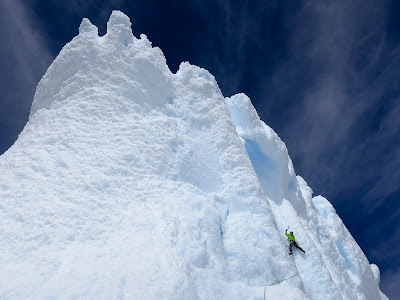 Chad coming up through the natural tunnel of the last pitch: 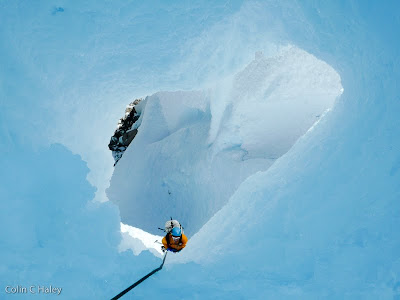 Chad heading up to the summit: 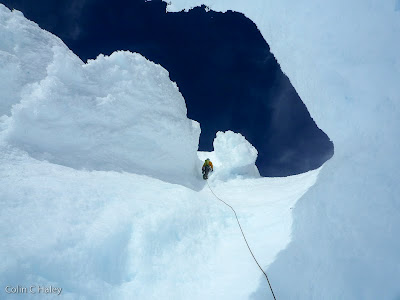 Colin arriving at the summit. Photo by Chad Kellogg: 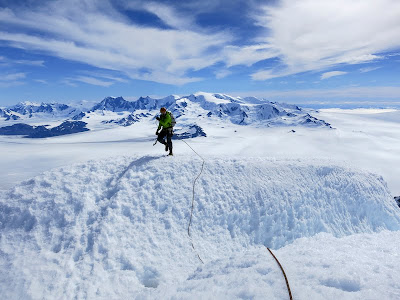 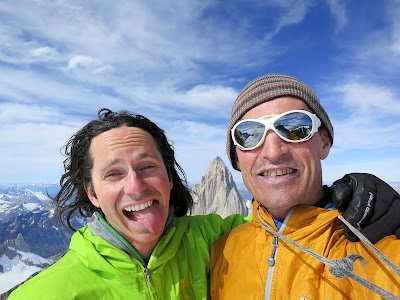 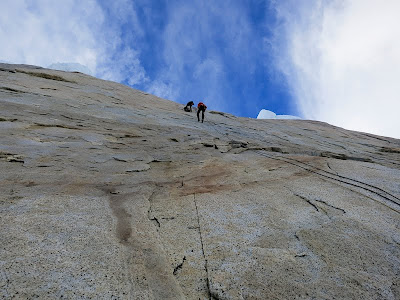 Chad down-climbing to a rappel anchor with the east headwall above: 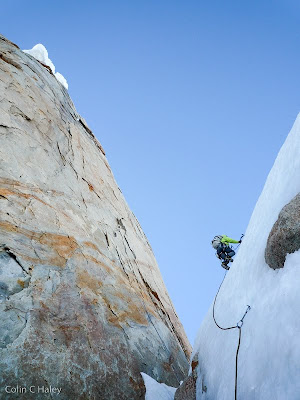 Colin rappelling below the Col de la Patiencia on the morning of the 26th, with the east face of Cerro Torre above. This is by far the driest I have ever seen Cerro Torre. Photo by Chad Kellogg: 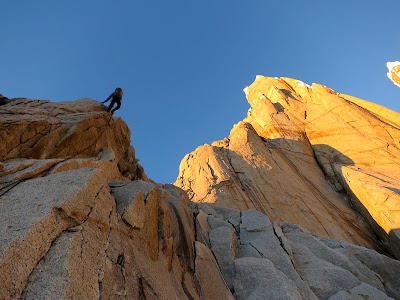 Looking back at the Torres as the two-week weather finally began to end. Photo by Chad Kellogg: 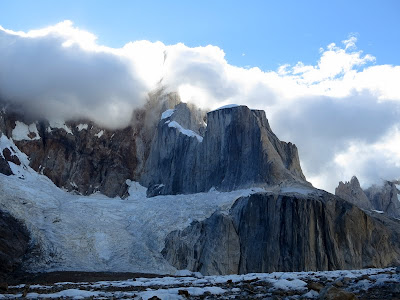