Sarah is back in El Chalten with me again, and after a few days of bouldering and sport climbing, we were back up in the mountains with yet more good weather. On Wednesday the 20th we hiked into the Torre Valley with our sights set on the enigmatic west face of Mojon Rojo. Mojon Rojo, while very modest from the east, is actually quite impressive-looking from the Torre Valley, with a steep face of red rock. There were rumors for a long time that the face had been climbed by Jim Bridwell, but Rolo finally did the research and found that Bridwell and Robert Staszewski had actually just climbed the couloir between Mojon Rojo and Aguja de l'S, and then reached the summit via the north ridge. Since the regular climbers here in the Chalten Massif are used to climbing on nearly-perfect-quality granite, there is a general fear of the non-granitic rock, and I think the only reason that the west face of Mojon Rojo remained unclimbed until now is because everyone had feared dangerously loose rock. With this possibility in mind, Sarah and I hiked in with a bunch of pitons, and expectations of intense, potentially scary pitches.

On Thursday morning we got an early start from Niponino, and after slogging up some loose talus slopes, reached the couloir between Mojon Rojo and Aguja de l'S at first light. From the very beginning, we were delighted with what we found - the rock, while not perfect, was far from loose or poorly-protected. It was in fact on par with some of the very best rock in the North Cascades. And, after climbing so much this season on granite, it was a delight to climb on a different type of rock, with many more face-climbing features. Although I posses of bachelor of science in geologic sciences, I am not really a geologist at all, and I can't tell you what the rock type was, except that it is metamorphic. And while my limited geology knowledge makes me skeptical that quartzite might exist right at the margin of a massive granite batholith, I have to say the rock was quite reminiscent of the "Back of the Lake" at Lake Louise.

We followed our noses up the path of least resistance and nicest-looking climbing. The first half of the route climbed a subtle buttress, and was mostly simul-climbing up mid-fifth-class, with one section of 5.10, A0. At the top of the buttress we followed an easy gully feature, which took us to the crest of the west ridge, at a notch with a tower. The route from here climbed spectacular crack systems on the face just left of the west ridge, with features always connecting just enough for enjoyable 5.10 climbing. As we neared the top of the face we almost joined a giant squeeze-chimney, which is clearly visible from down on the Torre Glacier. However, after taking one look up the squeeze chimney, I opted instead to continue connecting face cracks. The climbing remained 5.10 until the last few meters of the face, which I climbed at A1 off of knifeblades. The A1 section gained the west ridge, and from here one more pitch gains the lower, northwest summit of Mojon Rojo. From the northwest summit a spectacular section of simul-climbing on a true knife-edge ridge, and one short rappel, took us to the base of the main summit tower. Two rope-lengths of mid fifth class allowed us to join the scrambling terrain on the east face, and soon we surmounted the exposed V0 boulder problem that is the true summit of Mojon Rojo.

As we now rapidly approach the autumnal equinox, the days have been getting noticeably shorter in Patagonia, and we reached the summit of Mojon Rojo only a half-hour before dark. We had planned to return to the Torre Valley via the Bridwell-Staszewski route, but upon seeing how easy it would be to descend to the east, it was too great of a temptation, and we decided on the spur of the moment to descend to Laguna Sucia. I hadn't been to Laguna Sucia since 2003, so my very dim recollections of the route, combined with the darkness, made our descent to the lake longer and and trickier than necessary. We finally caught a couple hours of spooning/shivery/sleeping near the Rio Blanco campground, and made the weary hike out of the mountains.

This ascent felt like a real coup, because the quality of the climb far, far exceeded our expectations. The route felt to me to have rock reminiscent of the South Face of Ingall's Peak, architecture reminiscent of the East Ridge of Inspiration Peak, and a scale and overall feel reminiscent of the Greenwood-Jones on Mt. Temple. We named our route "El Zorro," in reference to the distinctly red rock, and in honor of the friendly fox, who has been hanging around Niponino this season, visited us the night before the ascent, and is probably at this moment destroying the tent which we left set up at Niponino (in search of the cheese and chorizo inside). It is a route I highly recommend. El Zorro, 700m, 5.10, A1.


Sarah in the approach gully between Mojon Rojo and Aguja de l'S: 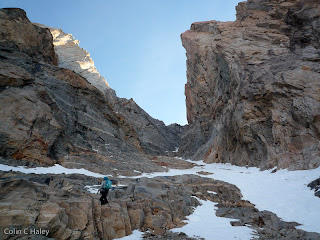 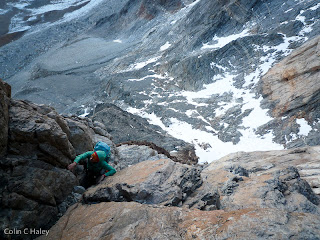 Colin climbing low on El Zorro - the rock is better than it looks! Photo by Sarah Hart: 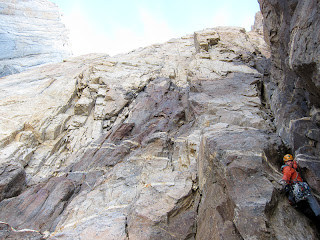 Colin nearing the top of the lower buttress. Photo by Sarah Hart: 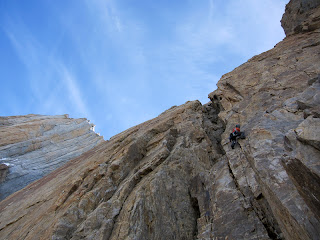 Sarah psyched but with cold fingers, near the top of the lower buttress: 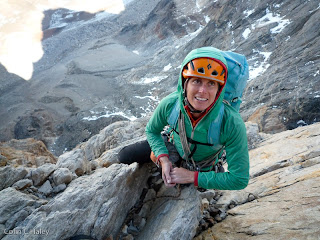 Sarah reaching the notch in the west ridge: 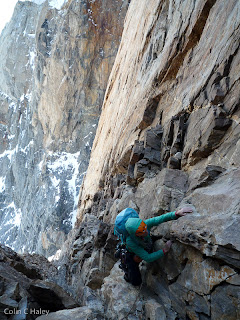 Colin on the first pitch above the notch - the start of the really great climbing. Photo by Sarah Hart: 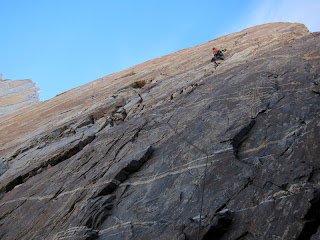 Sarah climbing the first pitch above the notch: 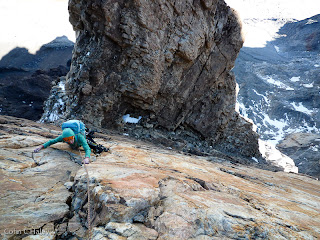 Spectacular climbing on the upper face. Photo by Sarah Hart: 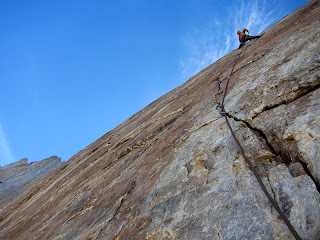 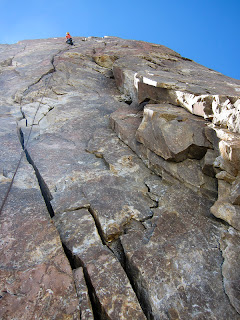 Sarah jamming on the upper face: 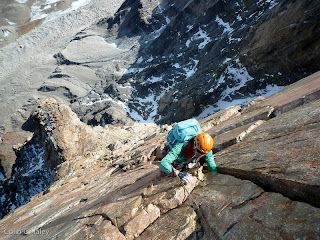 Sarah following yet another spectacular pitch on the upper west face of Mojon Rojo: 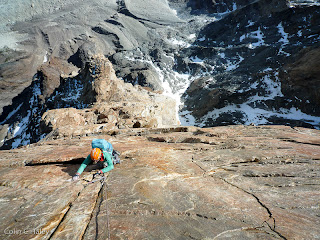 Colin traversing out to inspect the squeeze chimney (and declining to go that way!). The south face of Aguja de l'S is in the background. Photo by Sarah Hart: 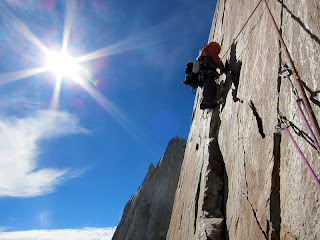 Colin climbing more awesome terrain, near the top of the west face. Photo by Sarah Hart: 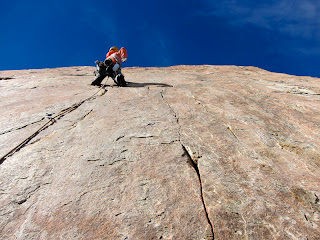 Sarah following near the top of the west face, with the Torre Glacier far below: 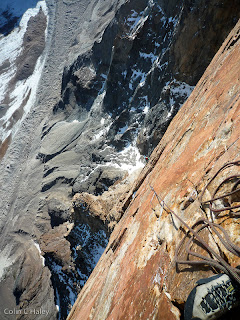 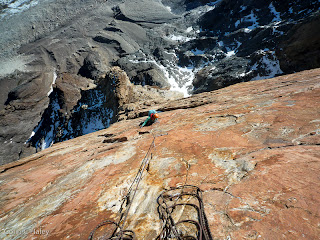 The short section of A1, with a condor flying above. The top of the squeeze chimney can be seen on the left margin of the photo. Photo by Sarah Hart: 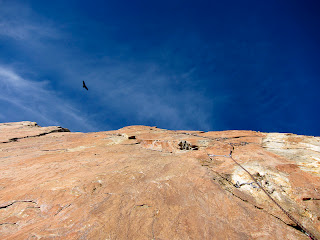 Sarah at the top Mojon Rojo's west face, with the west ridge of Techado Negro behind, Laguna Torre far below, and Lago Viedma in the distance: 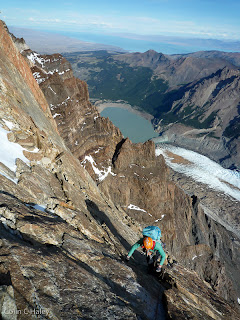 Colin on the last pitch of the west ridge, which gains the northwest summit of Mojon Rojo. Photo by Sarah Hart: 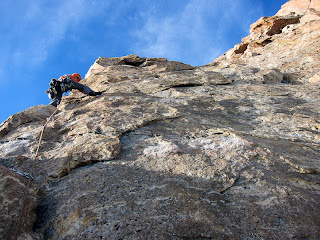 Sarah at the start of the knife-edge traverse towards the main summit tower, with the Torre Valley behind, and the south face of Aguja de l'S on the right: 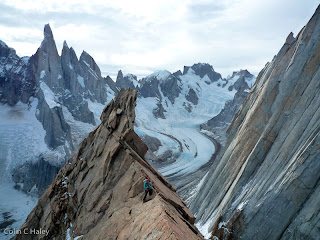 Colin traversing on the knife-edge towards the main summit tower, which we climbed on the left side (climbing through the patch of grey rock, and gaining the easy terrain on the east side). Photo by Sarah Hart: 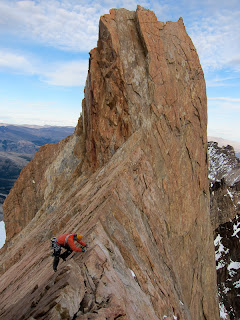 Sarah on the knife-edge traverse: 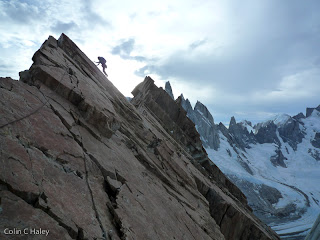 Sarah turning the corner to the easy terrain on the east side of the summit tower, with the south face of Aguja de l'S behind, and the Torre Valley in the background: 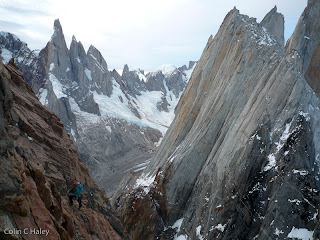 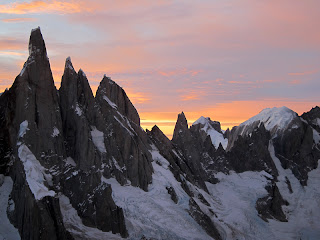 On the summit of Mojon Rojo! 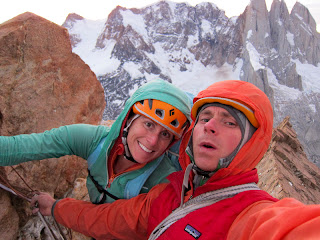 A cool, old piton on the summit of Mojon Rojo. Left on the first ascent? 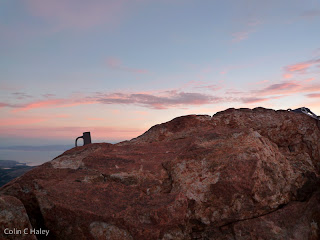 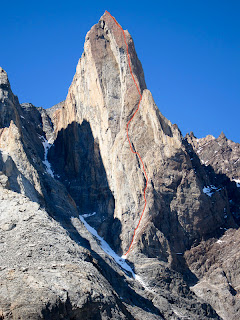