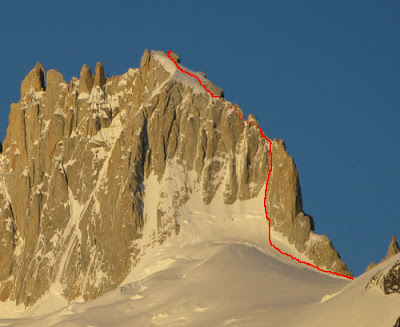 Aguja Guillaumet from the east, showing the Amy Route.

Much of my time in Patagonia is spent waiting for a large weather window to try a difficult objective, and I often let pass many mediocre but nonetheless climbable days, which are suitable only for smaller objectives. However, after festering for a while, and with no properly good weather in sight that could be potentially compromised by not being well rested, I figured I might as well head up to Aguja Guillaumet with a mediocre forecast for Dec. 20th. I had already climbed Guillaumet, one of the easiest summits in the range, three times before, so to make it more challenging I opted to head out alone. I chose to attempt the Amy Route because the first half is a snow, ice and mixed gully, and there was no doubt in the forecast that it would be far too cold to wear rock shoes.

Thus, I left El Chalten in a taxi to Rio Electrico early in the morning, and started the approach up to Paso Guillaumet. After spending a while at Paso Guillamet to eat, drink, and rack up, I finally walked up the short bit of glacier to the bergschrund, and started climbing around 10am. The bergshrund was gaping, and required a bit of tricky climbing up some snow and ice plastered to the right wall of the couloir. The couloir itself was easy, however, with a bit of steep snow, easy ice and blocky mixed climbing.

From the notch at the top of the couloir, I took off crampons and headed up the easy rock ridge above, occasionally taking off my gloves for harder moves. The crux pitch is a short 5.9 dihedral, which with rock shoes I would have been happy to free-solo, but with boots and gloves I decided here to use a rudimentary self-belay. Since I knew I would be rappelling down the same route, I could leave several nuts and cams on this pitch for my self-belay and retrieve them on the descent. I re-donned crampons half-way up the last rock pitch because a wide crack was ice up, and soon was walking up the summit snowfield.

I topped out at about noon, and made quick work of the descent - on schedule for an afternoon return to El Chalten, and a nice, relaxing day in total... However, at the notch at the top of the couloir I found an inexperienced climber, by himself, who was very confused as to the whereabouts of his partner, and did not have means to descend, considering that he had with him only two carabiners, a belay device, a single 50m rope, but no hardware whatsoever. After a lot of shenanigans looking for his missing partner, we rappelled the couloir together and began the hike out. His missing partner was soon found, and no harm done except that I ate a much later dinner!

On this climb I experimented with a new toy: a helmet cam. Through my first, laborious experience of editing video footage, I put together a video of the climb for the Black Diamond website: http://www.blackdiamondequipment.com/en-us/journal/climb/all/video-bd-athlete-colin-haley-wears-a-helmet-camera-during-a-solo-ascent-of-aguja-guillaumet-in-patagonia
Posted by Colin at 7:09 PM