The weather here in El Chalten remained poor for all of January and most of February, with only the occasional one-day mediocre window. Fortunately, unlike an expedition to Alaska or the Himalaya, the time spent waiting in Patagonia is quite enjoyable - you can live indoors, eat fresh fruit and vegetables, and stay in shape with excellent hiking, sport climbing and bouldering around town. The weather in the alpine was so bad for so long that I even managed to climb my first 7C+ (5.13a) redpoint, and my first V8!

Finally, in late February, something changed in the weather patterns, and for the past couple weeks we have been getting several two to four day weather windows, divided by only minor periods of storm. Unfortunately, after such a long period of bad weather, the peaks were more rimed up than I have ever seen before, and conditions for rock climbing were extremely bad. For this reason Rolo and I passed up several decent weather days waiting for conditions to improve. During the first properly good weather window the most successful climbs were several ascents of Supercanaleta, which is climbable in worse conditions than most routes as it is usually climbed without rock shoes. During this window Rolo and I attempted Aguja Kakito. We were beaten back by the iced-up cracks, but nonetheless had a good day out, with nice photo opportunities!

Rolo following a pendulum on Aguja Kakito, with the Torres and Aguja Desmochada behind: 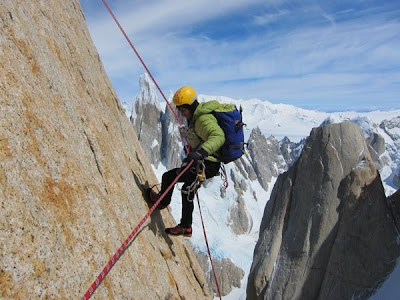 Rolo following a traversing pitch, with Aguja Desmochada behind: 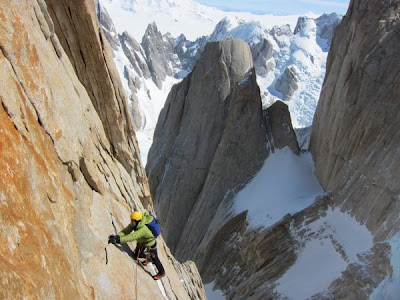 High on Aguja Kakito, with the Glaciar Piedras Blancas below: 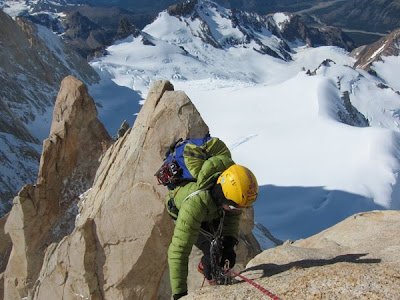 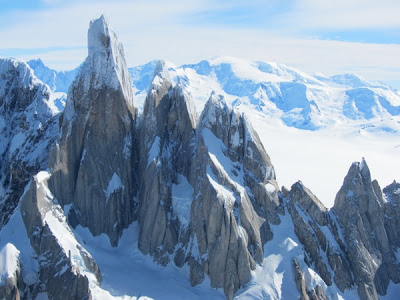 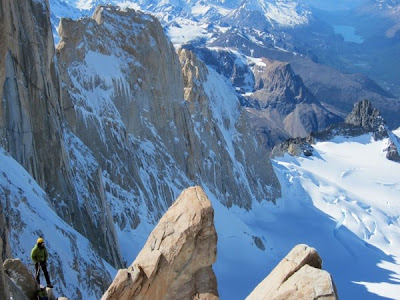 An evening reflection on Laguna Capri on a rest day afterwards: 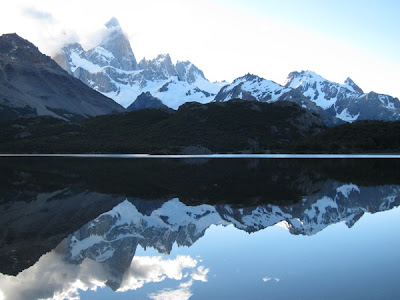 During the next, better weather window, Rolo and I made the fourth ascent of the "Care Bear Traverse" (a ridge traverse of Aguja Guillaumet, Aguja Mermoz, and Fitz Roy, established in 2008 by Freddie Wilkinson and Dana Drummond). We had already made the second ascent of this traverse last year, and this year we had hoped to climb something more, but the remaining icy conditions for rock climbing made even just another "lap" on this traverse a tiring endeavor.

Myself and Rolo about to start the Brenner Ridge on Aguja Guillaumet: 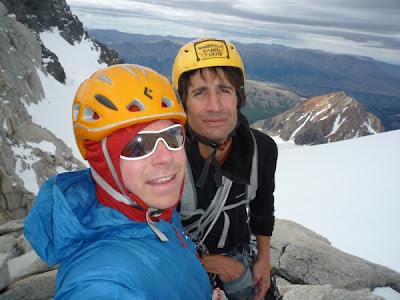 Rolo battling snowy conditions on the ridge between Guillaumet and Mermoz: 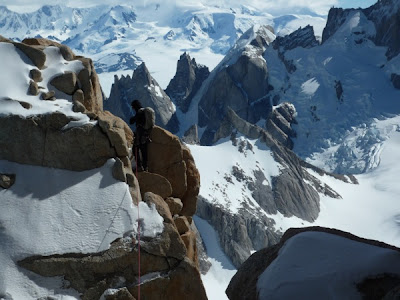 Rolo on rappel and more snowy conditions between Mermoz and Fitz Roy: 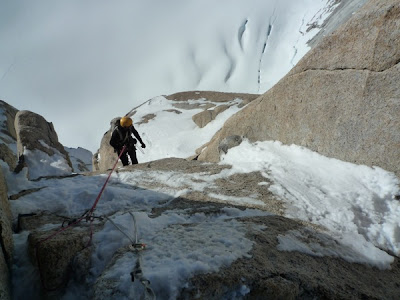 On the ridge between Mermoz and Fitz Roy, with the northern aspects of Fitz Roy behind: 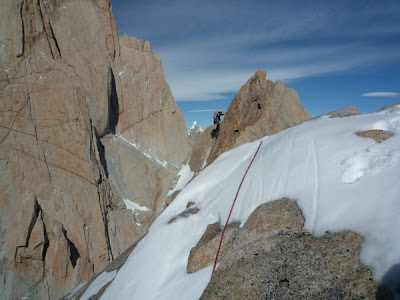 Rolo following a pitch high on Fitz Roy's North Pillar in the evening, with Mermoz below: 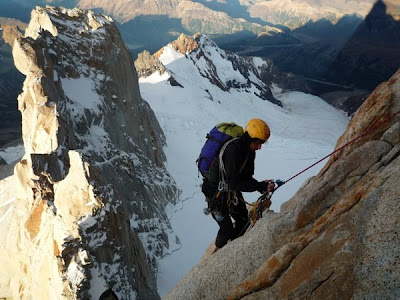 Sunset over the icecap from a bivy on the North Pillar: 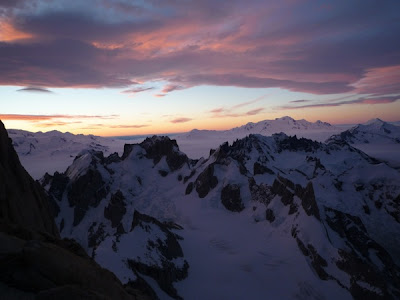 Rolo following the last rock pitch on the Casarotto route. Note how rimed up the top of the North Pillar is below, even after several sunny days (melting seems to be much slower than in December, when the sun is stronger): 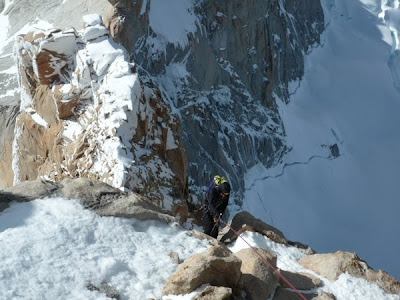 Rolo nearing the summit of Fitz Roy with the Torres and the icecap behind. Our third time summiting Fitz Roy together in tennis shoes (not necessarily reccommended!): 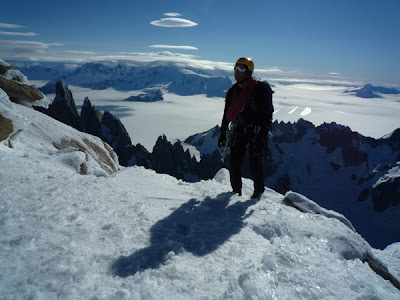 After the Care Bear Traverse Rolo had to drive north to Bariloche to participate in a guides' course. One last two-day weather window appeared, and so I made soloing plans in the Torre Valley. While trying to psyche up for a very difficult objective at the Niponino bivouac, I realized that I didn't feel mentally strong enough in the moment to make a solo attempt on what I had planned, and thus decided on an easier climb. But alas, in my pre-dawn stupor I forgot a few essential items in my tent while departing Niponino, and only realizing this a couple hours above Niponino, I had no choice but to descend, a bit disappointed in myself. I dried out my equipment for several hours at Niponino, and in the afternoon began the hike to town.

I reached El Chalten at 8pm, and immediately checked the weather forecast - The next day was still supposed to be good! I immediately re-packed, got a few hours of sleep, and at 6am caught a taxi out of town to Rio Electrico, bound for Aguja Mermoz. Despite the insufficient amount of rest, I felt good, and managed to solo the Argentine route on Mermoz in 16:15 car-to-car (3:45 base to summit), self-belaying on two pitches. I once again used my dorky helmet-cam, so you can expect another dorky soloing video once I find the time to edit the footage.

Now the days are getting short, the nights long and cold, and I'm packing my things. 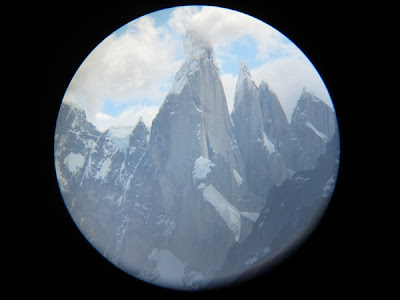