In May 2006 I spent a magical week in the Lofoten Islands of northern Norway. Situated above the arctic circle (aka, outside of the "moral circle"), and jutting out into the North Atlantic, the Lofoten Islands have an enchanting scenery of craggy peaks coming straight out of the rough ocean. My trip to Lofoten in 2006 was during the most joyful and carefree period of my life, in the company of a beautiful girl, and blessed by perfect, sunny weather - so, needless to say, despite only doing some very moderate climbing, it left me with wonderful memories.

Thus, when the Norsk Tindeklubb (Norwegian Alpine Club) invited me to join their winter climbing meet this year in Lofoten, I was psyched to join, and revisit this special place. The meet was held during the first week of March. I climbed mostly with my friend Bjørn-Eivind Årtun, but there were lots of great folks from various countries to socialize with in the evenings. The entire week was plagued with stormy weather, but we had a great time anyways. The wind and blowing snow just makes you feel more like a Viking, which, after all, is the whole point (well, at least for me)!

Lofoten is a very scenic place, so here's a rather photo-heavy post...

Flashback: Myself on the beach at Kalle in May 2006. Photo by Camilla Gjørtz. 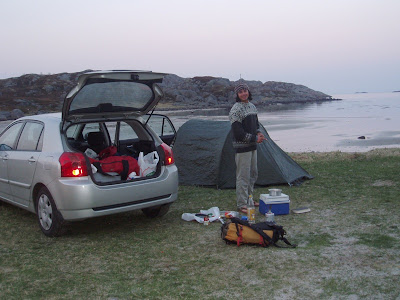 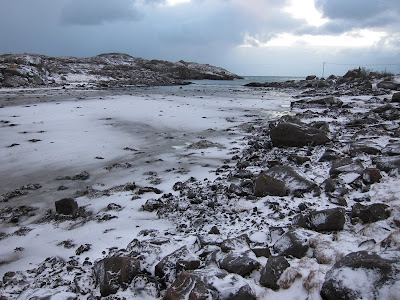 Flashback: The view towards the peaks from the beach at Kalle in 2006. Photo by Camilla Gjørtz. 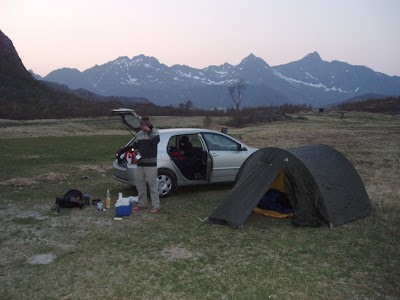 The same view, minus the flip flops: 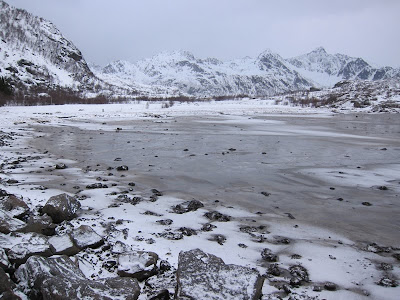 On our first day in Lofoten, Bjørn-Eivind and I climbed this buttress above Eggum. It looked more impressive from the road than it turned out to be up close, but it was a nice warm-up nonetheless. Photo by Bjørn-Eivind Årtun. 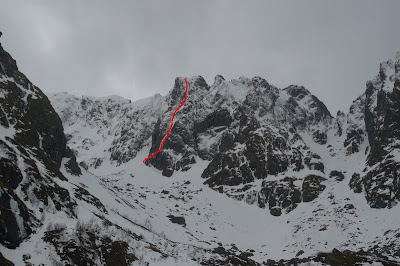 Ice, moss, and saltwater: myself starting up the buttress above Eggum. Photo by Bjørn-Eivind Årtun. 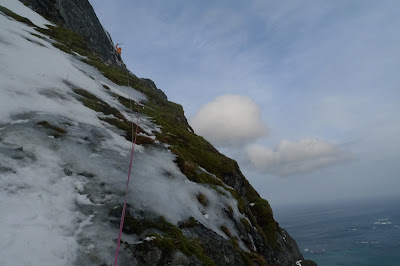 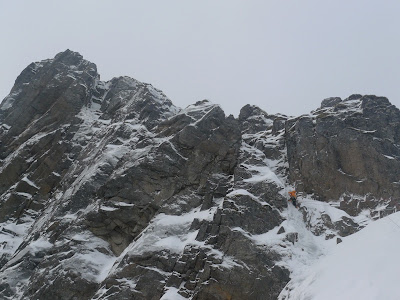 Our next climb was a line on Vågakallen, one of the nicest peaks in Lofoten. Some British friends were headed to Vågakallen the same day to climb a different line. Here is Nick Bullock on the approach, with Vågakallen behind. Photo by Bjørn-Eivind Årtun. 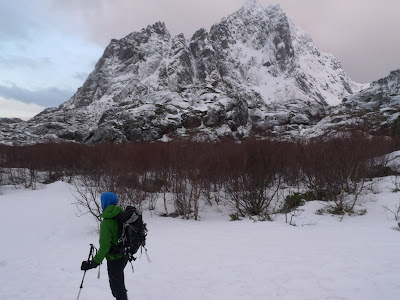 Myself feeling like a Viking in the gully that we started up on Vågakallen. Photo by Bjørn-Eivind Årtun. 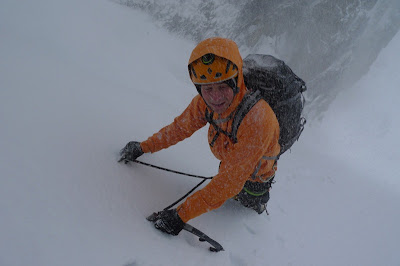 Bjørn-Eivind a bit higher in the gully, almost getting knocked off by the spindrift: 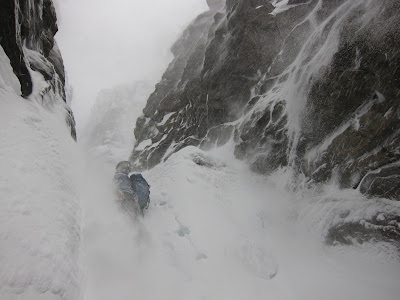 We branched off the right side of the gully, to climb the buttress to the right of the Storpillaren. Colin navigating some mixed terrain. 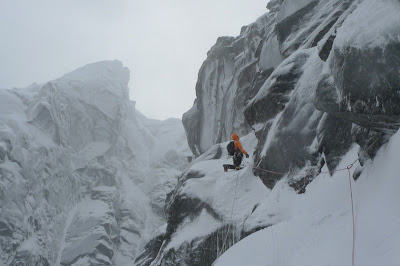 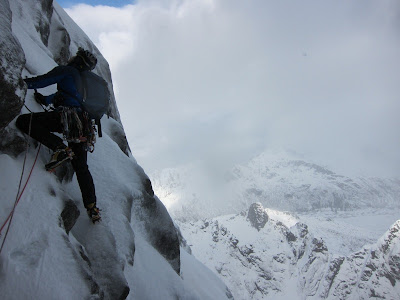 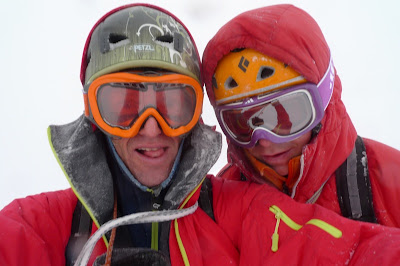 Myself downclimbing the summit ridge of Vågakallen, with the shoreline and some small islands visible below. Photo by Bjørn-Eivind Årtun. 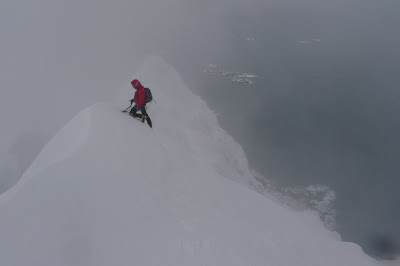 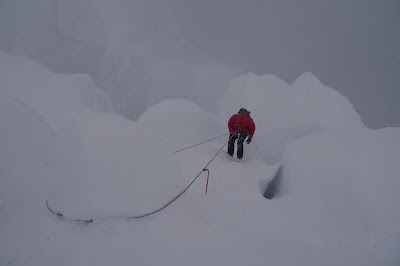 Climbing Vågakallen was definitely the best, and most memorable day I had in Lofoten. The climb went fairly smoothly, but fortunately the descent and hike out along the coastline had more excitment: nightfall, a non-working headlamp, an overhanging rappel into saltwater, and kilometers of crawling and climbing across snow-covered, seaside boulders and cliffs. Never before have I had seaweed on my crampons, or had saltwater washing over my winter climbing boots. Never before have I dove from one boulder to another, in crampons, to avoid a big wave. And all the while, the snow kept dumping down. This was Viking Alpinism! Photo by Bjørn-Eivind of me pulling the rappel ropes, standing on a boulder in the water: 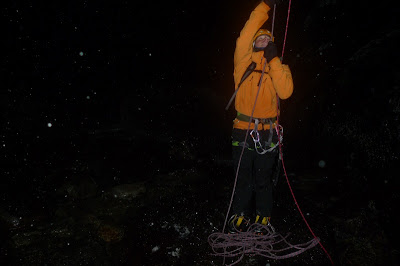 On our next climbing day we were joined by fellow junkie of Patagonian climbing, Trym Atle Sæland, for the Swiss Route on Abrahamstind. Trym on the approach, with Abrahamstind behind. The route is the obvious, straight white line in the center. 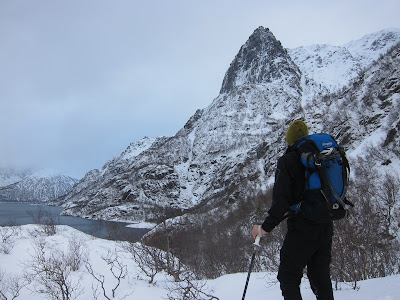 Myself starting up the runout first pitch of the Swiss Route. Photo by Bjørn-Eivind Årtun. 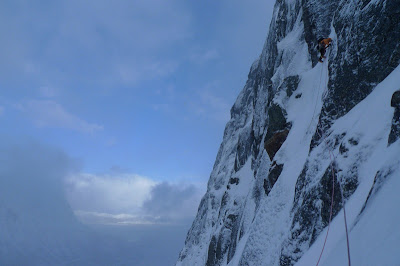 Bjørn-Eivind coming up to the belay at the top of the first pitch: 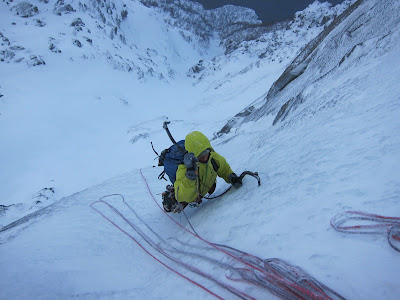 Bjørn-Eivind on a mixed step higher on the Swiss Route: 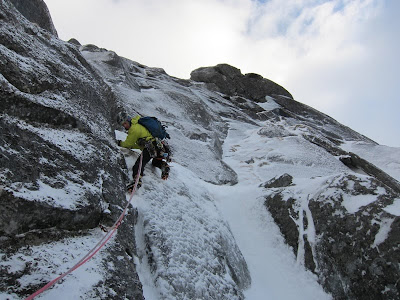 Trym starting up the second-to-last pitch: I thought Abrahamstind had the highest-quality climbing of the routes we climbed in Lofoten. Bjørn-Eivind following the second-to-last pitch of the Swiss Route: 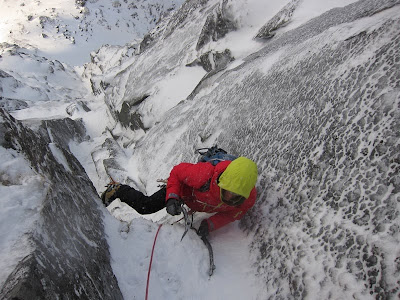 Trym and Bjørn-Eivind on the summit of Abrahamstind, with the fjord below. 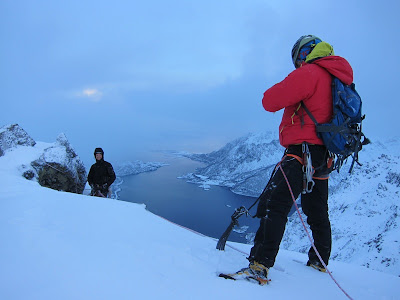 On our last day in Lofoten we headed out with lover-boy Marius Olsen to climb an ice/mixed line that he had spotted on the Svolværgeita (Svolvær Goat). The Svolværgeita is a craggy pinnacle directly above the town of Svolvær, and one of the most famous landmarks in Lofoten. Here is Marius, Bjørn-Eivind and myself on the approach, with the Svolværgeita above. The line we climbed is the white line in the center. Photo by Marius Olsen. 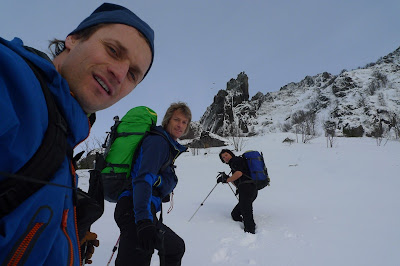 Looking down upon the town of Svolvær from the base of the Svolværgeita. Wouldn't it just be horrible if your neighborhood had a view like this? 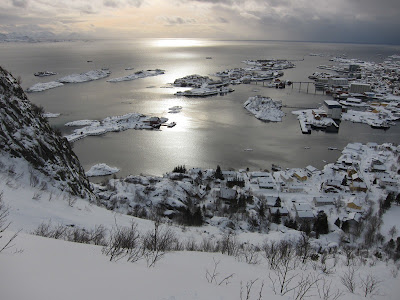 Marius leading the crux first pitch of the line we climbed. Photo by Bjørn-Eivind Årtun. 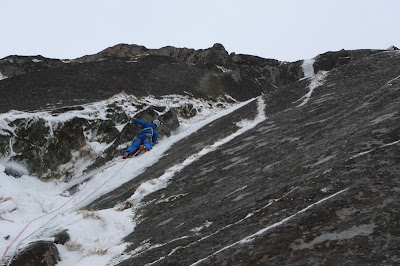 Myself leading the second-to-last pitch, at which point we had joined a classic summer rockclimb. Photo by Bjørn-Eivind. 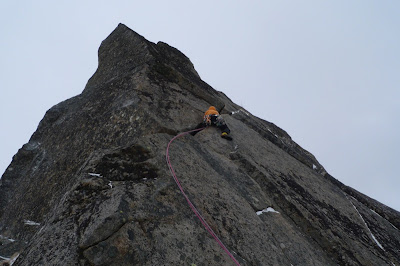 Fortunately I knew the beta! Myself leading the same pitch in 2006, under slightly different conditions. Photo by Camilla Gjørtz. 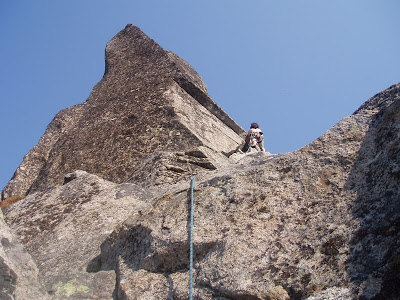 Svolvær lighting up at dusk: 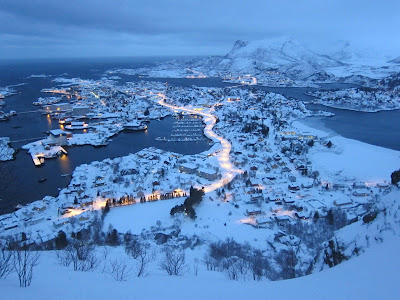 I spent the week afterwards in Oslo, with some visits to the climbing gym, a day ice climbing in Rjukan, and a bit of nordic skiing. Marius and myself in a bit of a tangle. Photo by Bjørn-Eivind Årtun. 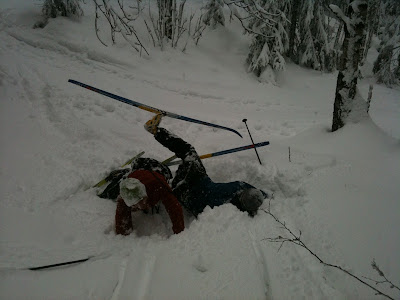