I have returned to El Chalten, in Argentine Patagonia, for hopefully
some more great climbing in the Fitz Roy and Cerro Torre massifs. As
seems to be my un-breakable curse, I arrived just a bit too late to
take full advantage of a weather window. Fortunately, at least this
year the weather window that I missed was not as spectacular as the
ones I missed the past few years.

I hiked into the Torre Valley on the best weather day, Monday, Nov. 7,
and on Tuesday made an attempt on Cerro Pollone, via its original
South Face route. The route was first climbed by an Argentine team in
February 1949, and in the 62 years since it has not been repeated (at
least as far as Patagonia climbing historian Rolando Garibotti is
aware). Cerro Pollone itself did not even see a second ascent until
last February, when Blake Herrington and Scott Bennett reached the
summit via the West Pillar.

The South Face route on Cerro Pollone is not difficult however (at
least until the last 30 meters), and I figured that even alone it
would make a nice mellow warm-up for the Patagonia climbing season. I
left the Niponino bivouac at 4:30 am on Tuesday, and with pretty good
snow conditions, made good time up the icefall at the head of the
Torre Valley to the base of Cerro Pollone's South Face.

The south aspect of Cerro Pollone, from down in the Torre Valley, with
the Filo del Hombre Sentado in the right foreground, showing the line
I attempted. On the lower part I climbed to the right of the rock
buttress, while the original route went to the left, simply because it
looked easy and made the approach shorter. 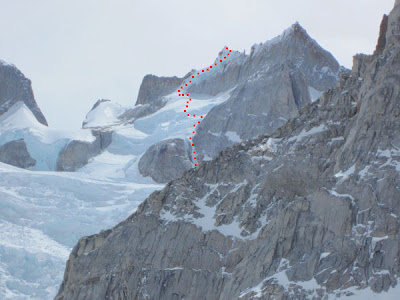 Looking up Cerro Pollone from below the bergschrund. The mellow ice
flow on the right was a totally contrived variation, but was fun to
climb anyways, mostly just because I hadn't done any ice climbing in
several months: 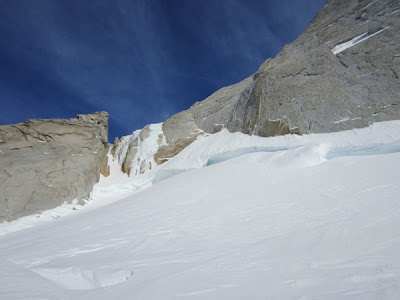 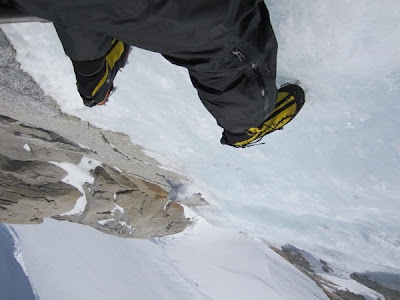 Most of Cerro Pollone's South Face is a mix of low-angle ice climbing
and navigation around crevasses and bergschrunds. The last 30m summit
tower, however, is the crux of the climb: 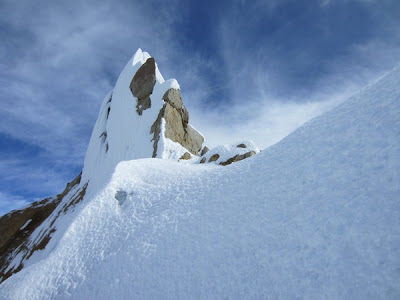 After climbing 30 meters of moderate mixed terrain, I was turned
around 2 meters below Cerro Pollone's summit! The final summit block
seemed to be blank rock, covered with too much rime to see any crimps,
and too little rime to climb the rime itself. In any event, trying to
surmount it seemed too sketchy to properly try with a minimalistic
self-belay system. I've been turned around near the tops of mountains
before, but I have never before reached my ice tool to 40cm below the
summit without being able to actually get on top of it! 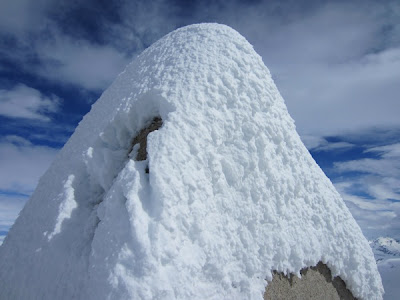 Despite not being able to complete the ascent, it was nonetheless a
nice warm-up, and climbing on Cerro Pollone provided some cool views
and difference perspectives than I have normally seen in the Torre
Valley. The view to the south, with the Torres on the left in a
cloudcap, and Cerre Piergiorgio, with its fantastic west wall in
profile, on the right: 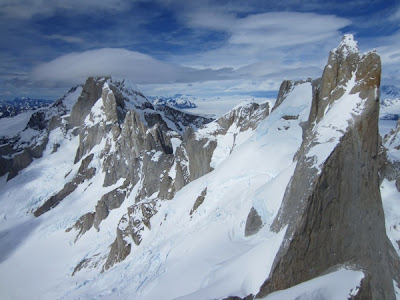 The view to the east, with an awesome perspective on the Fitz Roy
massif, Cerro Pollone's lower east summit in center, and Aguja Tito
Carrasco in the lower left. 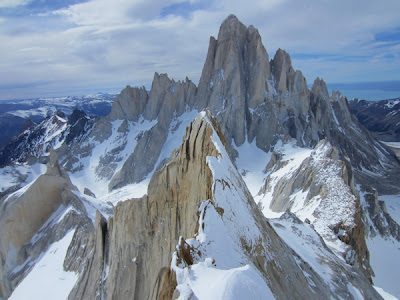