On November 30th, I hiked into the Torre Valley with my friend Jorge Ackerman, who is from Bariloche, but has been living in Squamish for the past year. We hoped to climb Torre Egger via the O'Neil-Martin route, so continued past Niponino to the Norwegos bivouac. On December 1st we left Norwegos early, and hiked up the glacier to start climbing at 5:30am. I made a route-finding mistake on the first few pitches, which cost us some time. Additionally, conditions were poor, and pitches that are normally easy in rock shoes required climbing with crampons and ice tools. After climbing six pitches, due to the poor conditions and our lack-of-bad-ass-ness, we decided that we were moving too slowly for our planned itinerary and supplies, and bailed. We descended to Niponino that night, but the decent weather was forecasted to hold for a couple more days, so we rested in Niponino on the 2nd, and hiked back up to Norwegos that evening.

We left Norwegos again early on the morning of December 3rd, planning to climb Festerville (the north ridge) on Cerro Standhardt. On the way up to the Standhardt Col, strong winds caused us to reconsider our plans for Festerville, which is very exposed to the wind. We quickly changed objectives to the un-finished south face of Standhardt, which had been almost climbed in 1977 by a British party, and had since repulsed a few other attempts over the years.

Jorge led the first couple tricky mixed pitches above the Standhardt Col, and then we simul-climbed across the long ramp that cuts diagonally up Standhardt's east face. After turning the corner onto the south face, Jorge led a mixed pitch up and left that brought us to the main dihedral system which is the defining feature of the south face. I led the next four pitches, the first two of which were predominantly aid climbing, and the second two which were mostly free climbing on mixed terrain. On the first of these four pitches, Jorge thought that we should choose the left of two cracks, but I foolishly chose the right crack. When it disappeared into blank rock, I had to make two large pendulums to gain the crack system to the left, and we lost a bunch of time from this route-finding blunder of mine.

Jorge led the next ice pitch, which brought us almost to the top of Standhardt's south face. From here I thought we ought to traverse to the left, but Jorge opted to go straight up instead. Once again his route-finding proved to be right on, and the chimney directly above provided the key to exiting the face. This exit chimney was very steep (overhanging), and probably the crux of the route. Fortunately, a knifeblade crack on the right wall of the chimney made for somewhat straightforward, but strenuous aid nailing.

From Jorge's belay above the exit chimney, I made a few aid moves on rock (and a short fall when a micro-cam popped out of a dubious placement), and then some rime climbing to top out the south face. As usual, the Standhardt summit mushroom was easy and straightforward AI3, and we reached the summit at 9:00pm.

The weather had been steadily deteriorating throughout the day, and by the time we topped out we were both climbing in our belay parkas. Of course it was a pleasure to finish the route, but reaching the summit was also a great relief, because we could descend the relatively-straighforward rappels of Exocet, rather than an epic descent of the Toboggan route, which climbs to the col between Standhardt and Punta Herron. We made all but the first few rappels in the dark, and eventually reached Norwegos just after first light, 25 hours after departing.

We have named the route El Caracol, which means "the snail." This is in part because the word "caracol" in Spanish refers to a spiral shape (that of a snail's shell), which is fitting for our route, but also because of our snail-like pace on the tricky pitches.

Leading an iced-up dihedral on the lower portion of the O'Neil-Martin route on Torre Egger: 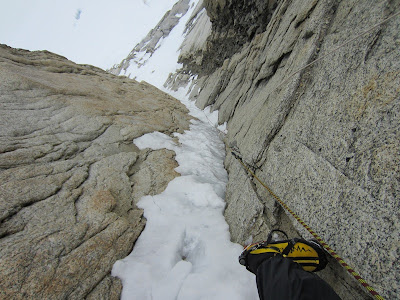 Jorge at our high-point on Torre Egger: 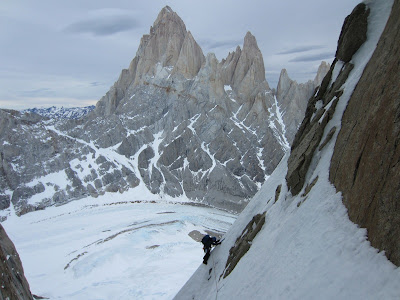 Almost done with our bail from Torre Egger: 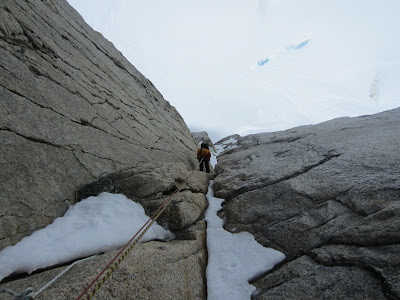 Jorge leading the first pitch above the Standhardt Col: 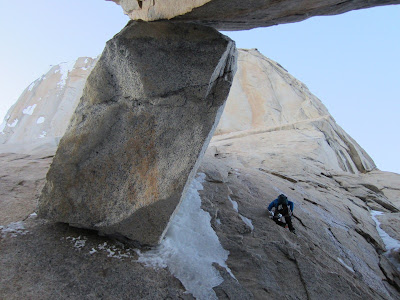 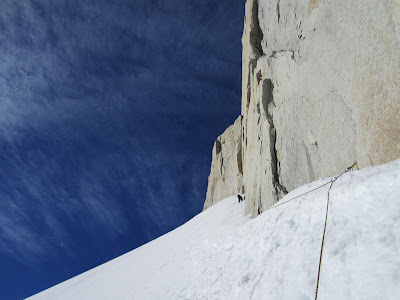 Jorge's belay on the corner of the east and south faces of Standhardt: 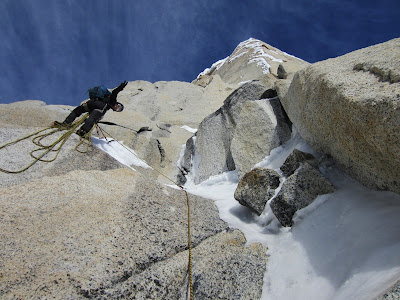 Jorge starting up the first pitch on the south face, mixed climbing up and left, with the summits of Cerro Torre and Torre Egger in the background: 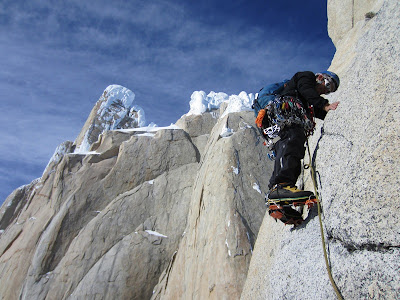 Jorge following a quick and easy ice traverse, with the summits of Poincenot, Inominata, St. Exupery, and de la S on the other side of the valley: 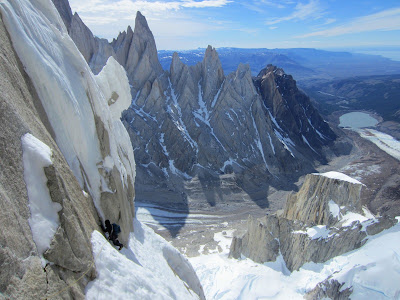 Looking down the slow aid pitch, on which I chose the wrong crack, and had to make two time-consuming pendulums to the left: 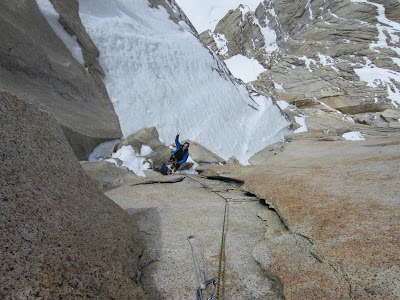 Feeling a bit worked after the slow aid lead: 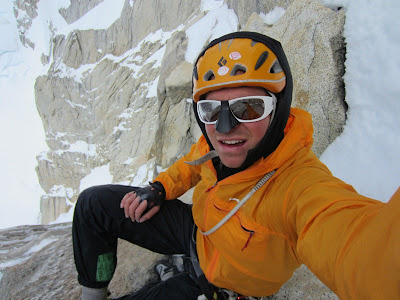 Jorge coming up to the belay above the slow aid lead. At the end of this pitch I aided off of two ice screws, because I had left my pack (and therefore my boots and crampons) hanging below. 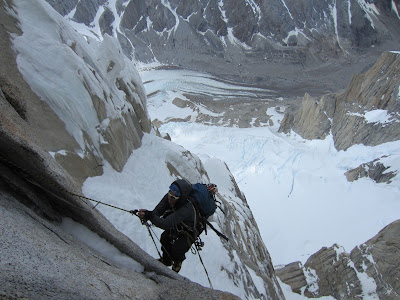 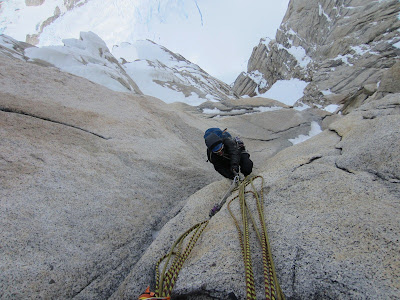 Jorge following the last pitch of my block, up classic mixed goullotte climbing: 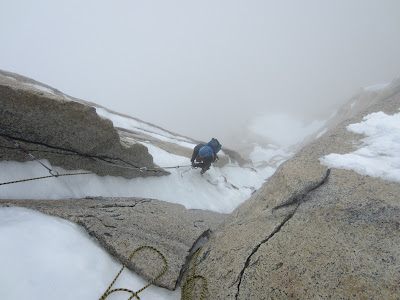 Jorge starting up an ice pitch near the top of the south face: 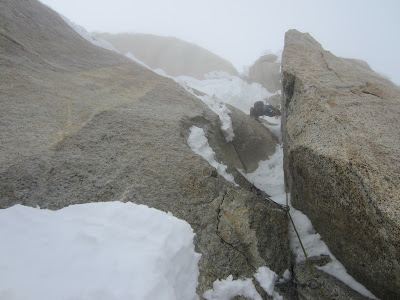 Jorge arriving at the base of the summit mushroom: 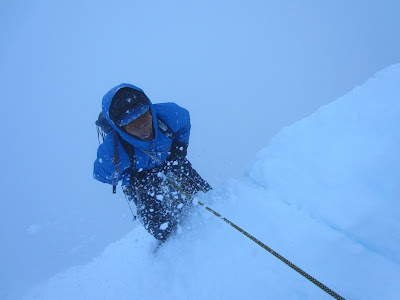 Jorge on the summit of Cerro Standhardt: 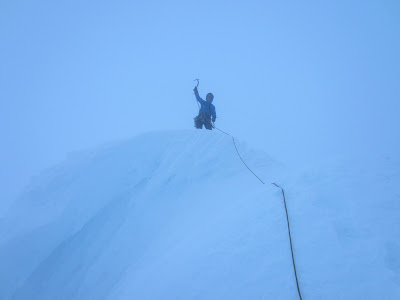 When we returned to Norewgos we were cold, wet and tired... but at least there was a rainbow! 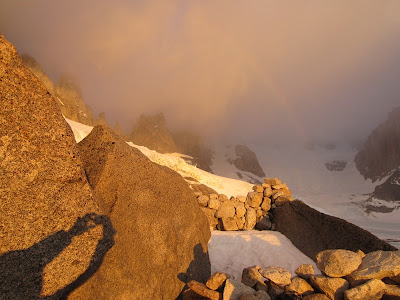 The south face of Standhardt, showing the line of El Caracol (500m, 5.9, A1+, M4). The route we took is marked (with the pendulum), as well as the route that future parties ought to take, on the crack further to the left. 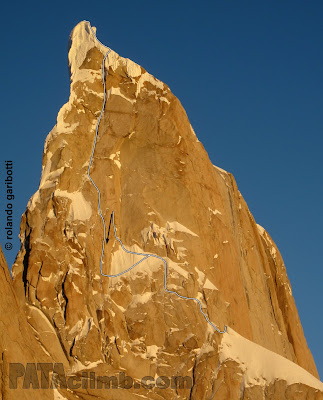