On my second trip to Patagonia, in 2005 with my friend Mark Westman, we had many days of good climbing weather. Thus, we had a very busy, fruitful trip, and I was able to complete a goal of mine at the time: to climb the seven main summits of the Fitz Roy ridgeline. This group of peaks includes Aguja Guillaumet, Aguja Mermoz, Fitz Roy, Aguja Poincenot, Aguja Innominata, Aguja St. Exupery and Aguja de l'S. Like any summit "collection" (such as the 14 8,000'ers, the 82 4,000'ers, the Seven Summits, etc), it is a basically silly idea, and depends on one's definition of "main summits." For example, this list does not include the more minor summits of Aguja Val Biois and Aguja Kakito, which are also on the Fitz Roy ridgeline. It also does not include Aguja de la Silla or Aguja Desmochada, which although they are not on the Fitz Roy ridgeline (they are part of a separate, spur ridge), are more difficult summits to reach than Aguja Guillaumet or Aguja de l'S. Nonetheless, these seven summits are generally agreed upon as the main summits of the Fitz Roy ridgeline, are all great peaks, and certainly make a much more interesting collection than the standard "Seven Summits!"

In January 2009, about to fly home from Argentina and return to sitting in a university classroom, I soloed Fitz Roy via the Supercanaleta route. Because of the marginal weather and conditions in which I climbed the route, it remains the most memorable and difficult day that I've ever spent in the mountains. When I arrived the following December in Chalten during the middle of good weather, I immediately hiked into the mountains and soloed Aguja Poincenot via the Whillans route. At this point I began to envision completing the "Seven Summits" by solo ascents, and later that season soloed Aguja Guillaumet and Aguja Mermoz. Although this project has never been my top priority in Patagonia, it has been a fun and challenging journey - perfect to chip away at when lack of big weather windows or good partners did not allow attempting bigger dreams.

After soloing Aguja Innominata last week, I realized that I was getting finally quite close to completing this project, so when another weather window arrived in the forecast a few days later (the Patagonia weather gods must be drunk!), I made plans to attempt Aguja St. Exupery and Aguja de l'S.

I hiked into the Torre Valley on Tuesday, Dec. 13th, and bivied on a small ledge about 300m above the normal Polacos bivouac. Early on the 14th I hiked up the approach gully to the Kearney-Harrington route on Aguja St. Exupery. Although technically easier and shorter than the more popular Chiaro di Luna route, the Kearney-Harringon involves both rock and mixed terrain, so one must climb all the rock with boots, crampons and ice tools in the backpack. With perfect weather, I was comfortable free-soloing the majority of the route, and rope-soloing six pitches. The descent went smoothly, and I arrived back at my bivouac shortly before dark, 16 hours after departing.

The next morning (Dec. 15) I allowed myself to sleep until the leisurely hour of 7:30am, ate some breakfast, and then headed back up the approach gullies, this time to Aguja de l'S. I was tired from climbing St. Exupery, but fortunately Aguja de l'S is a much easier climb. I climbed Aguja de l'S via the north ridge, which is a variation of the Austrian route. I belayed a short approach step, and then free-soloed all of the route except for one pitch. The descent went smoothly again, and that evening I hiked back to town.

Except for the Supercanaleta, none of the rest of these seven solos are among my best climbs. Mermoz, Innominata and St. Exupery are all technically more difficult than the Supercanaleta, but much shorter, less committing climbs. I am proud of the achievement as a whole though, and it has been a good journey. At the very least, I have learned a lot about soloing highly-technical alpine terrain, and perhaps some day I can apply those skills to bigger dreams.

Jugging back up the second pitch that I belayed on the Kearney-Harrington: 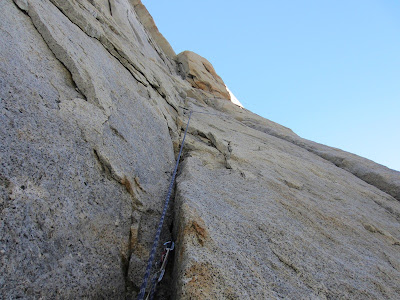 Climbing in the main ramp system that is the defining feature of the Kearney-Harrington route: 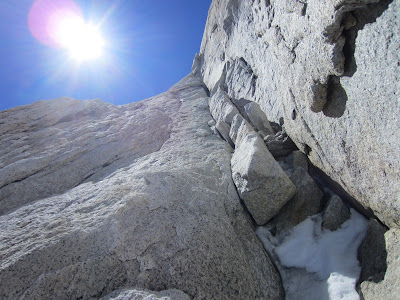 Taking a break on a ledge part-way up the Kearney-Harrington: 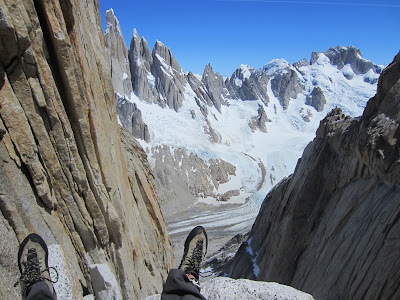 A lot of the Kearney-Harrington route is somewhat chossy, but it has some nice sections as well. In particular, the last pitch to gain the upper east buttress is excellent: 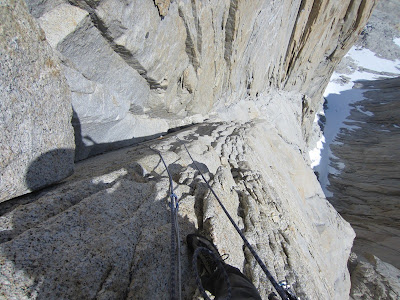 The upper part of the Kearney-Harrington route, on St. Exupery's upper east buttress, is mostly a mix of snow ramps and short but steep rock steps: 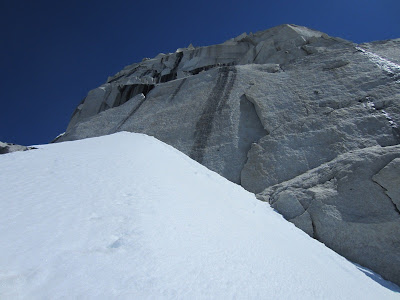 I'm glad this didn't happen until the last hard pitch: 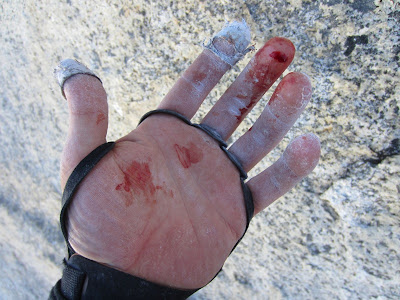 Jugging back up the last steep pitch on St. Exupery's upper east buttress: 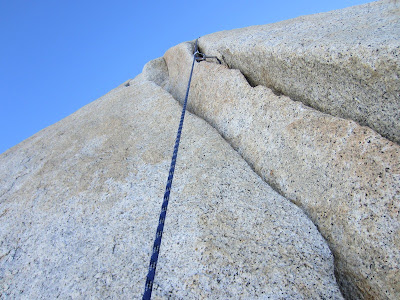 The summit of Aguja St. Exupery: 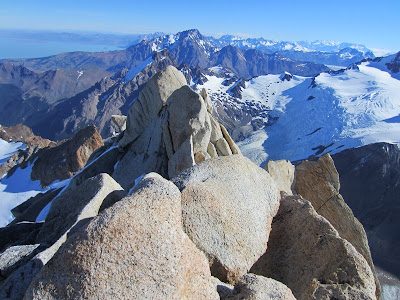 Self-portrait on the summit of St. Exupery: 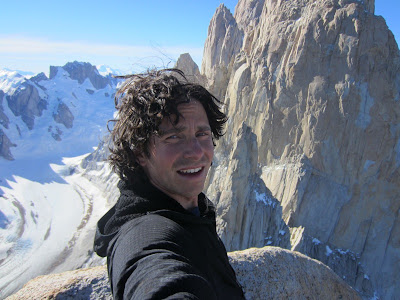 The upper north aspect of Aguja de l'S after climbing the approach pitch. I climbed the obvious, deep chimney: 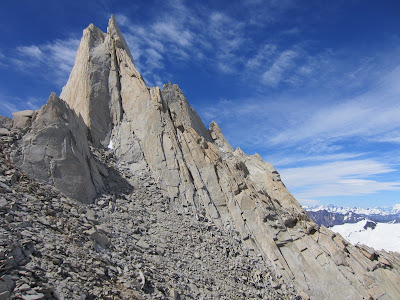 Taking a break in the chimney on Aguja de l'S: 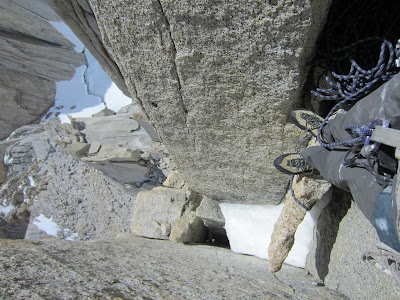 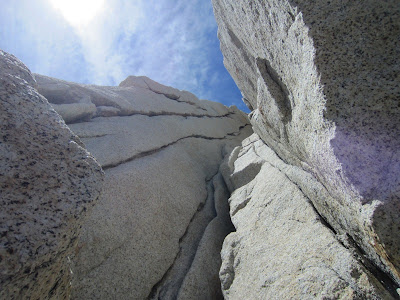 This is the pitch on Aguja de l'S that I decided to belay: 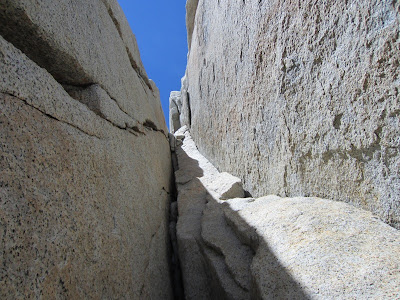 Some low-angle squeeze-chimney near the top of Aguja de l'S: 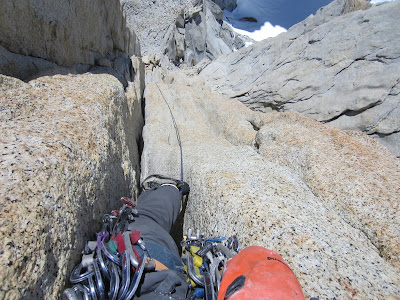 The summit of Aguja de l'S: 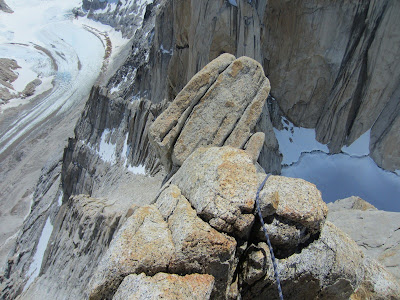 Self portrait on top: 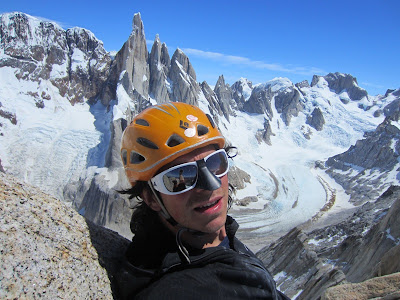 On the hike back down to Niponino from Aguja de l'S, I ran into Jason Kruk and Hayden Kennedy, who had just climbed Aguja St. Exupery via Chiaro di Luna. Thursday was one of the hottest days I have ever experienced in Patagonia, and generally mountains begin to fall apart when it gets hot. We witnessed a massive rockfall coming off of El Mocho: 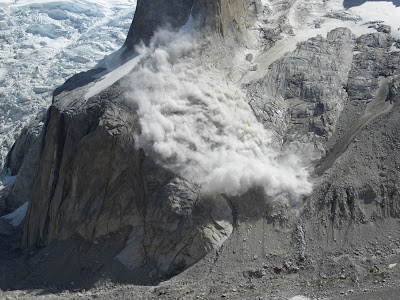