Another Expedition Fails on the Choktoi...

Despite 30 years of expeditions by many of the world's best alpinists, Pakistan's Choktoi Glacier maintains a 0.0% success rate on the magnificent objectives that are accessed there (Latok 3, Latok I, Latok 2, Ogre 2, Ogre I). The snowpack this year in the Karakorum was the biggest since 1976 according to the locals, which made glacier-travel easy and ridge-climbing difficult. Here is a report on the most recent Choktoi failure, in the words of Dylan Johnson:

We completed three acclimatization trips on nearby ridges and peaks. First we spent one night at 5000m on a ridge immediately above base camp. Our second trip involved three days retrieving Colin’s gear cache at 5700m at the Ogre/Ogre II col, left behind during his 2008 attempt on the Southeast Buttress of the Ogre with Maxime Turgeon. Our third and final acclimatization mission took us to the summit of the High Sister at 5800m and an adjacent high glacial plateau where we spent two nights at 5850m.

At midnight on 8 July, with a forecast for three good days followed by a minor 24 hour storm, we started toward the base of the north ridge with three 32 pound packs. Our intended line climbed snow and ice on the east side of the ridge, intersecting the ridge at 6000m above the lower sections of heavily corniced and mushroomed ridge. We reached the base of the technical climbing at dawn and began belaying a 250m water ice step. Colin led the first block of grade 3 and 4 ice topping out on steep snow at 5450m. I led the following block of 60 degree snow and ice to the base of a steep mixed step at 5750m where Josh would take over. Our intended line continued up the steep mixed terrain above, which looked reasonable from base camp, but now appeared exceedingly difficult. We opted to climb a short mixed pitch followed by an arduous snow pitch (courtesy Colin, our unconsolidated snow master) to reach the ridge and a bivi near 5830m.

After stamping out a platform on the narrow double-corniced ridge we discussed our options. The ridge itself was impassable due to the sugary mushrooms and cornices, our only option for ascent was to traverse west off the ridge. From his 2008 attempt, Josh knew the terrain to the west was complex and difficult as well. We decided the climbing was too slow and difficult and the chances of summiting were too slim to justify continuing. We rappelled the lower northwest face the following day and returned to base camp and called in the porters. On our trek out from base camp, we met the Spanish alpinists, Alvaro Novellon and Oscar Perez hiking in to attempt the North ridge as well. May they have better luck than we did, inshallah!

The North Faces of Latok 3 (left) and Latok I (center), taken from our basecamp in 2008. The red line shows where we climbed to on our 2009 attempt. We descended on the northwest face (out of the photo, past the North Ridge). 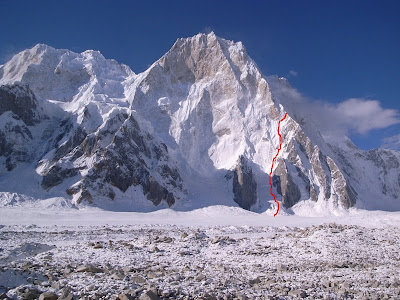 Our awesome and amazing cook, Abdul Ghafoor, who is from the Hunza Valley. 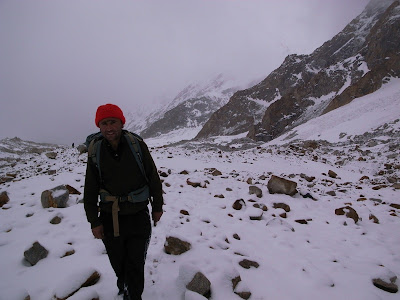 Dylan and Josh during our first acclimatization venture, at 5,000 meters. The words at the top of the Scrabble board are indicative of Expeditionary DSB (Deadly Semen Buildup). 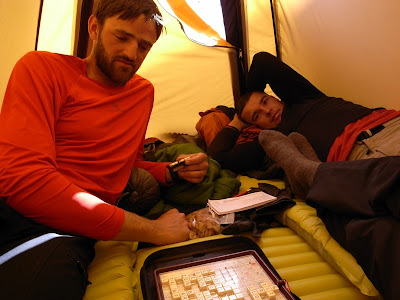 Colin bouldering on the glacier near basecamp. Photo by Dylan. 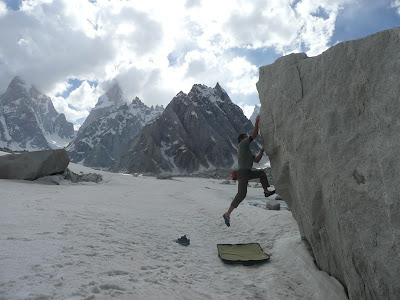 The Ogre 2 (left) and Ogre I (right) from the Choktoi glacier. Our second acclimatization venture took Dylan and I to the col between the two. Photo by Dylan. 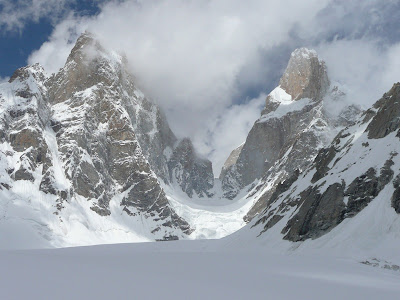 Dylan and Josh hiking up a tributary glacier during our third acclimatization venture. 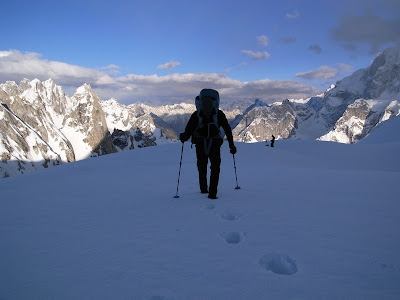 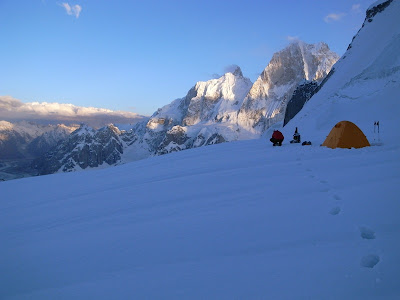 Josh and Dylan nearing the summit of the highest of the "Three Sisters." 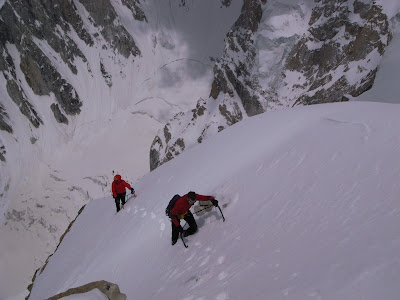 A massive serac avalanche pouring onto the Choktoi Glacier from more than 2,000 meters above on the north face of Latok 3. It dusted our basecamp, on the opposite side of the glacier and past several moraines. 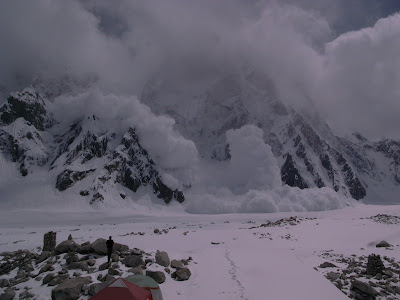 Josh and Dylan following the opening ice pitch during our attempt on Latok I. 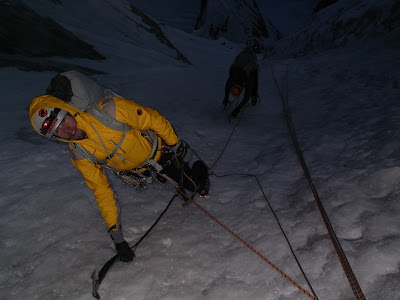 Dylan arriving at the top of the ice runnel, a couple hundred meters higher. 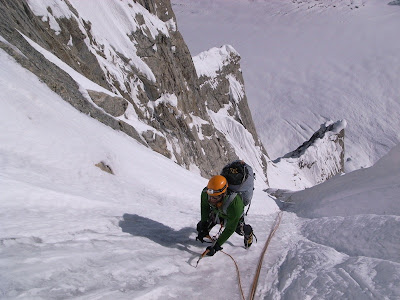 Dylan leading a pitch of snow flutings and easy mixed. 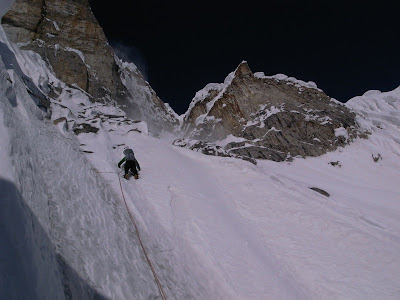 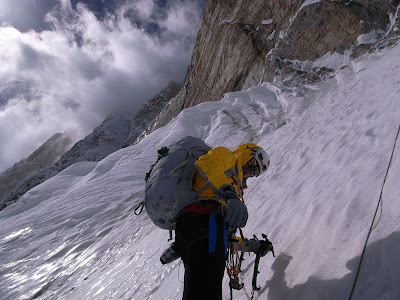 Colin filling bottles during our brew stop at the top of the tiresome 60-degree ice field. Photo by Dylan. 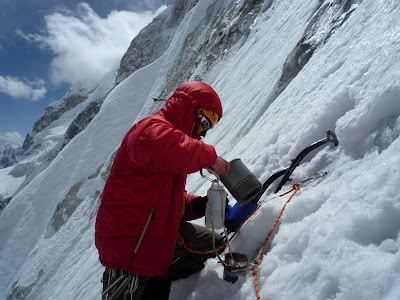 Dylan traversing towards the North Ridge. 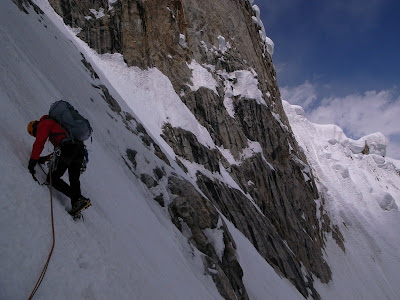 Josh arriving on the crest of the North Ridge after the unconsolidated snow pitch. 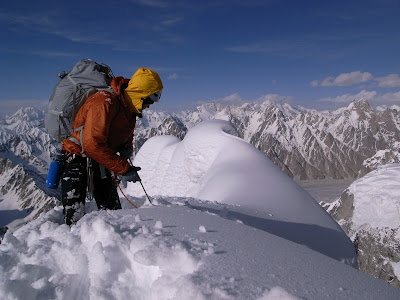 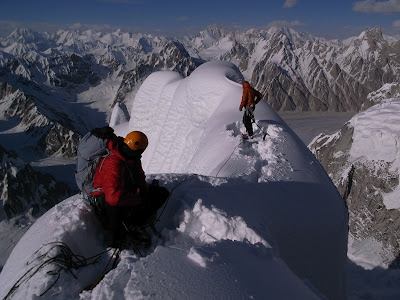 Our bivy the following morning. We started rappelling towards the left. 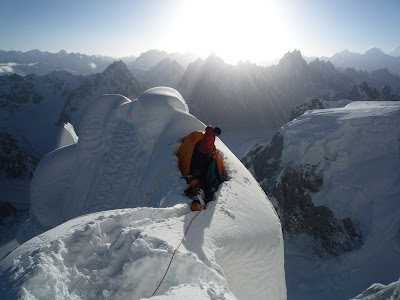