With the exception of Devil's Thumb, I've had generally bad luck with the weather during the past year. September, which is normally a wonderful month in the Cascades, was horrible. I went down to Yosemite for most of October, and the weather was actually better back home in the Cascades! Ah well, I nonetheless got some good climbing in, and worked on my fist jams, offwidths and chimneys, which are definitely weak points for me. A highlight was climbing the Astroman-Rostrum linkup with my friend, Sam Piper, and I was pleased to just barely manage it all free.

There is a meter of new snow at 5,000 ft. in the Cascades, and so on Wednesday I had my first day skiing of the 2010-2011 winter. Dan Aylward and I skinned up to Camp Muir on Mt. Rainier. The ski down, with lots of wind-affected snow, was less-than-ideal, but not too bad for pre-Halloween!

Unfortunately, on our way out skiing we learned of the death of yet another friend and local climber, Joe Puryear. Joe was climbing in Nepal with Dave Gottlieb and broke through a cornice while unroped.

Joe's skill as a climber is apparent to anyone who knew his climbing accomplishments. Joe was also a very kind and unique individual. His quirkiness caught me off guard the first time I met him, but I soon realized that he simply enjoyed a hobby that is a favorite of mine as well: acting weird and watching people's reactions!

Joe was one of very few North American climbers currently practicing old-school alpine-style climbing in the Himalaya. He and Dave Gottlieb have been quietly racking up a slew of first ascents during the past few years, usually in remote, relatively unexplored areas. By old-school I mean that they were tackling big, snowy peaks with lots of difficult corniced-ridges and snow climbing - a type of climbing that doesn't garner a lot of attention these days, but in actuality is often more difficult than WI6 or M6.

During the winter break of my last year of high school, I spent a week climbing waterfalls in the Canadian Rockies with Joe and Mark Westman. Joe was undeniably the rope-gun. In recent years I sometimes crashed at Joe's house in Leavenworth before a winter alpine-start in the Enchantments, enjoying the company of Joe and his wife Michelle. He will be missed by many.

Joe leading the last pitch of The Sorceror, Feb. 2003: 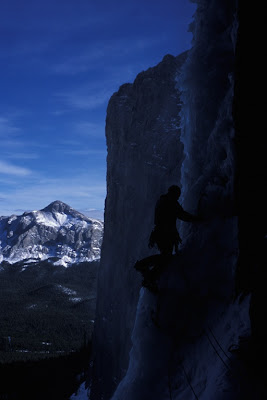 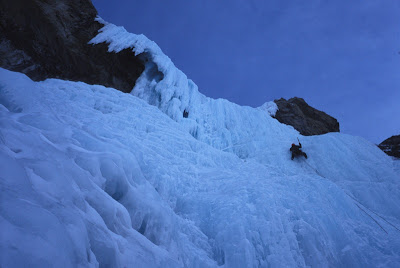