For the third year in a row, I arrived in Patagonia just at the end of an excellent and long weather window. I immediately hiked up to the Torre Glacier, but alas, I was too late and it closed down. C'est la vie. Fortunately, a two-day window of good weather arrived not too long after, this past Friday and Saturday (Nov. 26-27). I used it to make a solo of Cerro Standhardt, one that I had been planning since last February here in El Chalten.

I left the Niponino bivouac very early Saturday morning, and at four am arrived at the Standhardt-Bifida col, where the Exocet route (500m, WI5, 5.9) begins. In the dark I self-belayed the slabby mixed terrain of the first pitch, and then in the morning sunlight soloed across the large ramp system that rises across Standhardt's east face.

After traversing the ramps, the defining feature of Exocet rises straight above: the vertical and largely-blank granite wall is split by a deep chimney, choked with ice in the back. The chimney is four pitches long, with difficulties of about WI4, WI5, WI5, and WI4. The first two pitches of the chimney I free-soloed, hauling my pack up behind me. I climbed quite slowly, making sure that every tool placement was absolutely bomber. Although the third pitch is no harder than the second (and in fact a bit easier I think), I chose to self-belay it, as I could feel my arms getting tired. The fourth pitch I free-soloed except for a ten-meter step that I self-belayed with a back-loop.

Above the chimney is another slabby mixed pitch which I self-belayed, and I then continued up to summit mushroom, which goes with an easy and straightforward pitch of AI3. I reached the summit at 4pm, twelve hours after beginning, and began my descent. The descent of Exocet is one of the easiest and most straightforward in Patagonia because it is almost entirely on ice and clean slabs, so there is very little for the rappel ropes to catch on. I stumbled back to my tent at Niponino, arriving very tired shortly after dark, and the weather window broke down as I slept through the night. On Sunday the rain didn't let up for a single minute on the long hike from Niponino back to town.

This was the first solo ascent of Cerro Standhardt. In 1994, Tommy Bonapace soloed most of the Exocet route, but was forced to turn back at the top of the ice chimney because of a bad storm.

I had originally planned to take my helmet cam on this solo, but the night beforehand I decided that for free-soloing of this difficulty I didn't want the extra hassle of the equipment, so a few snapshots will have to suffice: 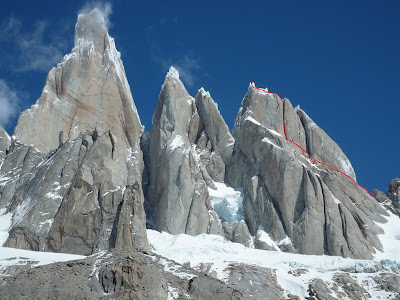 Self-belaying the first pitch in the dark. 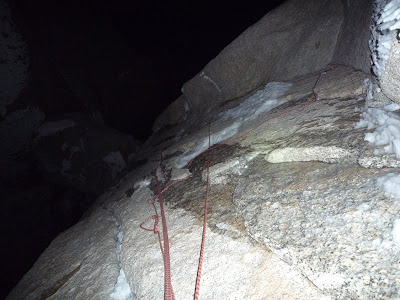 Looking up while traversing the big ramp system. 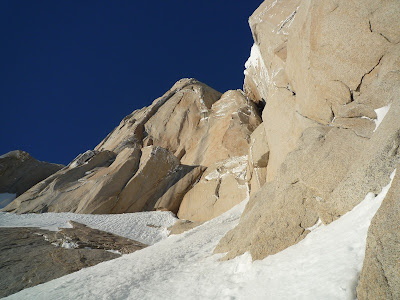 Looking up from the base of the ice chimney. 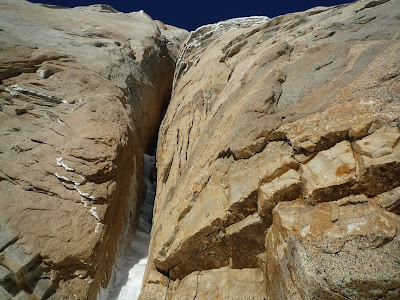 Looking up the third pitch of the ice chimney. 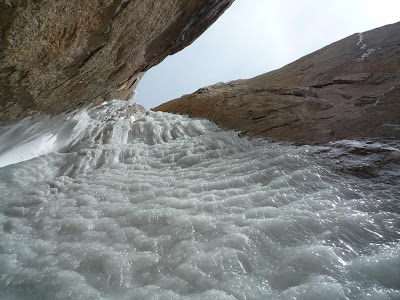 At the base of the third chimney pitch, the self-belay system I used on it. I "invented" this technique specifically for this route, which allowed me to climb a full 60m pitch self-belayed, but then continue up afterwards without having to first rappel and prussik the pitch (but I had to leave the ice screws and pick them up on my descent). 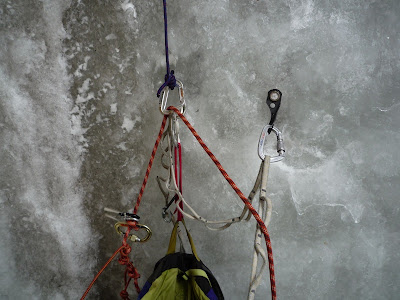 Self portrait at the top of the ice chimney. 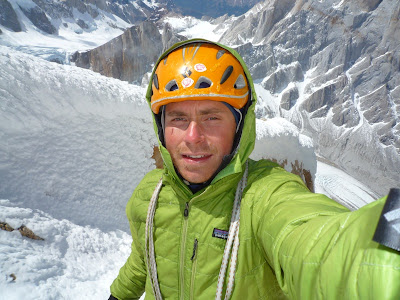 Looking to the north, towards Cerro Piergiorgio, while traversing to the summit mushroom. 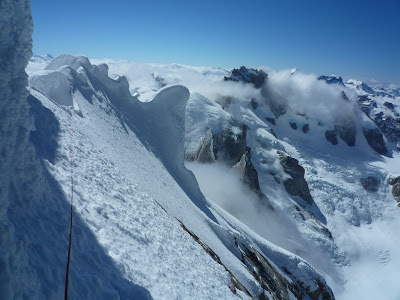 The view from the summit of Standhardt, of the tops of Cerro Torre, Torre Egger and Punta Herron. 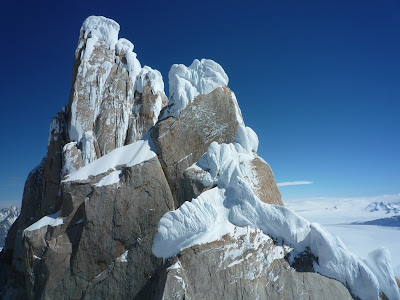 Self portrait on the summit, with Fitz Roy and Poincenot behind. 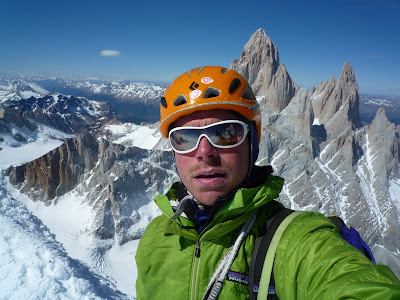