In 1959, Cesare Maestri attempted to climb Cerro Torre via it's North Face. At some point during the climb, descent, or descent of the glacier below the face, Maestri's climbing partner, Toni Egger, perished. Maestri claimed that they had made the first ascent of Cerro Torre, and the third member of the expedition, Cesarino Fava, either believed Maestri or agreed to lie in agreement with Maestri. Over time, more and more doubts began to surface as to whether Maestri had indeed climbed Cerro Torre. Today it is widely accepted that Maestri made the most famous lie in the history of climbing.

Angered by all the skepticism, Maestri returned to Cerro Torre in 1970. To "prove" that in 1959 he had made the greatest ascent of all time, by an extremely-difficult line on the North Face (that still has not succombed to many attempts over decades, by extremely talented climbers, such as Alexander Huber, Stefan Siegrist, Thomas Ulrich, Toni Ponholzer, Ermanno Salvaterra, etc) in semi-alpine style, he began sieging an easier line on the mountain (the Southeast Ridge) with the help of a large team, thousands of meters of fixed rope, and a gasoline-powered air compressor to drill bolts with ease. On the lower part of the ridge, Maestri refrained from bolting very much (after all, there are tons of perfect granite cracks), but as he gained elevation it seems he lost more and more reason. He began his siege during the winter, and where the ridge-line (which is the natural line, contains good cracks, and was climbed by Ermanno Salvaterra and Mauro Mabboni in 1999) was caked with rime-ice, he decided instead to bolt a traverse across a huge section of blank rock on the right (east) side of the ridge. Higher up, on the headwall, Maestri drilled pitch after pitch of bolt ladders despite many cracks, because the pitons had accidently been forgotten lower on the route. Strangely, Maestri never even attempted to reach Cerro Torre's summit, and instead descended from the highest rock on the headwall. He didn't even allow his climbing partners to join him at his highest belay station. While rappelling the last pitch that he had climbed, Maestri chopped a long section of his bolt ladder. This is now known as the "Bridwell Pitch," re-drilled with rivets by Jim Bridwell when he and Steve Brewer made the first complete ascent of the Compressor Route (and third ascent of Cerro Torre) in 1979.

Maestri's siege of Cerro Torre's Southeast Ridge shocked the climbing world. Although many routes in the Andes, the Himalaya and Alaska have been "dumbed down" by the use of siege tactics, Maestri's ascent was an unprecedented low in terms of style, and remains today the worst example of climbing style the world has ever seen. Although no one knows exactly how many bolts he drilled into one of the world's most beautiful mountains, estimates range from 350 to 450. It was this disaster which Reinhold Messner coined "the murder of the impossible." The Compressor Route remains the most over-bolted and controversial climbing route in the world today. It makes what would otherwise be one of the world's most difficult mountains to summit a fairly easy climb, with so many pitches of A0 bolt ladders.

Since then, there have been many, many ascents of the Compressor Route (which many people recognize as not a true ascent of Cerro Torre), and two films have been made on it. In 1985, Fulvio Mariani created a film called "Cumbre," which contained footage of Marco Pedrini making the first solo ascent of the Compressor Route. "Cumbre" was filmed in alpine style, with only Mariani and Pedrini involved. It is a beautiful climbing film, and well worth watching. In 1992, Werner Herzog filmed "Scream in Stone" on the flanks of Cerro Torre. His expedition sadly fixed ropes on all of the Compressor Route and the Ferrari Route, and left lots of garbage on the Torre Glacier. However, even his large-scale production (with Hollywood actors, crashed helicopters and all) only felt the need to put two bolts in Cerro Torre.

The 2009-2010 season in El Chalten was memorable for two reasons: exceptionally bad weather (even by Patagonian standards), and the assault on Cerro Torre made by David Lama's Redbull-sponsored expedition. David Lama came to El Chalten with the intent of free-climbing Cerro Torre's Southeast Ridge (the "Compressor Route"), and a large crew came along with him with the intent of filming David Lama's ascent. Unfortunately, the expedition acted without much foresight, and began fixing a string of ropes up the Southeast Ridge. Bad weather prevented them from fixing their ropes beyond Maestri's ninety-meter bolt traverse.

In February 2010 David Lama's expedition left Patagonia early, dismayed by the horrendous weather. They did not bother to remove any of the ropes that they had fixed approximately 700 meters up the Compressor Route. More than a month after leaving Patagonia, Redbull hired several Argentine guides, Horacio Graton, Simon Brun, and Juan Raselli, to go remove Redbull's fixed ropes for them. The Argentine guides succeeded in stripping most of the fixed ropes from the route (but were not able to remove all of them), but were not able to carry all of the detritus down from the route, and thus were forced to leave two haulbags full of equipment at the bergshrund.

One of the mountain guides that Redbull had hired to fix ropes, Heli Putz, claimed publicly that only 12 bolts had been placed, and that they had been placed off of the normal climbing route. Because the climbing season was already well over when Heli Putz made this claim, it was impossible to verify if it was true or not.

On November 14, 2010, Rolando Garibotti and Doerte Pietron climbed the Compressor Route, and on their way managed to remove 17 of the Redbull bolts above the Col of Patience (but missed 3 more, which they were not able to remove). They discovered that not only had Heli Putz publicly lied about the number of bolts placed, but he had also lied about their location, with all of the new bolts having been placed on the route, many immediately next to established belays and perfect cracks. 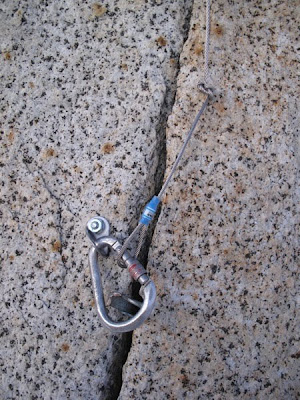 Photo 1: One of the Redbull bolts on the Compressor Route that was removed by Garibotti (photo by Rolando Garibotti). 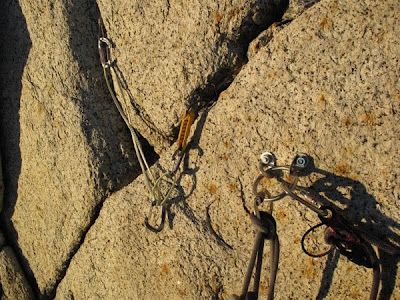 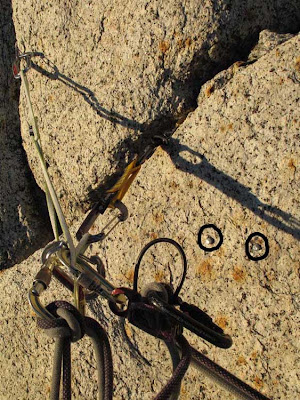 Photo 3: The same belay after the bolts were chopped by Garibotti (photo by Rolando Garibotti). 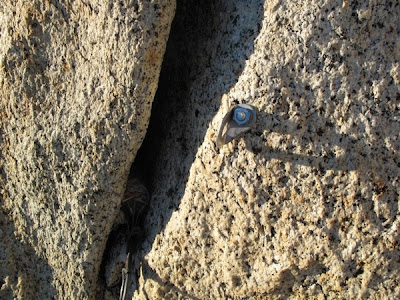 Photo 4: Another of the Redbull bolts above the Col of Patience (photo by Rolando Garibotti).

On January 9, 2011, Rolando Garibotti, Doerte Pietron and myself, Colin Haley, climbed on the lower slopes of the Compressor Route, and we removed 12 more bolts that Redbull had placed below the shoulder (but we weren't able to remove 2-4 more, which are still in place). In this area, Redbull had claimed that they had bolted an alternate rappel route away from the normal one, but again, all of the new bolts were in close vicinity to established natural anchors. 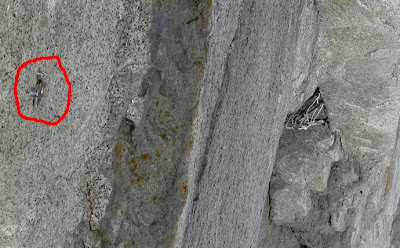 Photo 5: Some of the Redbull bolts below the Col of Patience, which were supposedly drilled on a separate line - yet are located a few meters from established natural rappel anchors (photo by Rolando Garibotti). 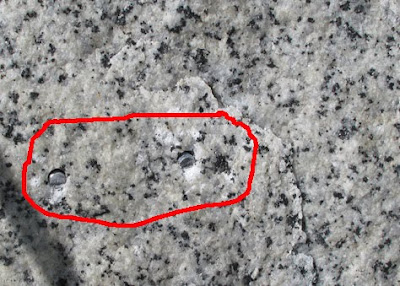 Photo 6: The same bolts after they were chopped by Garibotti (photo by Rolando Garibotti). 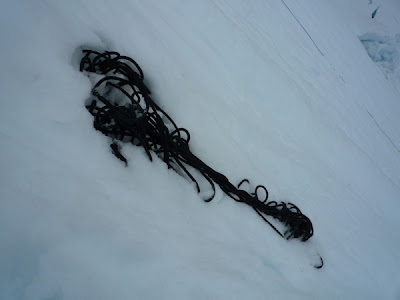 Photo 7: Some of the leftover garbage: One of Redbull's fixed ropes, now frozen into the snow above the bergshrund. In this vicinity we also found many red, nylon rope protectors strewn about ledges on the rock buttress above (photo by Colin Haley).

David Lama and his crew of mountain guides and film makers returned to El Chalten last week, and many of the climbers here were apprehensive of how his expedition would behave this season. Fortunately, they have learned somewhat from their recklessness last season, and this year they have promised that they will not fix any ropes on route (which is good, because besides the obvious fact that fixing ropes is an unimpressive way to climb, the fixed ropes ruin the experience of other climbers on this popular route). They also have promised not to bolt on the established route, and have promised to remove the remaining 5-7 bolts that they left on the route last season. Their plan now is to climb as five people: in front will be a team of three (two mountain guides and one cinematographer), and behind will be David and his climbing partner, Peter. This is a logical way for them to shoot footage of David Lama's efforts to free-climb the route, and an important step forward for them.

David Lama plans to bring a small bolt-kit with him, so that he has the option to hand-drill some bolts if necessary. If he adds bolts to the Salvaterra variation it would be totally out of line, as Salvaterra climbed the variation in 1999, and already placed all the necessary bolts (and Josh Wharton and Zack Smith climbed a variation to the variation in 2007, without adding any bolts). It is reasonable, however, that Lama is bringing the bolt kit, because on the headwall they will likely attempt a different line than the blank rock Maestri bolted, and the line they attempt will likely be terrain on which any climber would use bolts. What is not reasonable, however, is the way David Lama plans to use his bolt kit. In a conversation with me, Lama explained that they plan to reach the summit via the normal Compressor Route bolt ladders, and then rappel a separate line of weakness on the headwall, placing protection bolts on rappel. Yes, that's right - rap-bolting the Cerro Torre headwall! I tried to convince Lama that he might place the bolts on lead, hanging from hooks, but he insisted that rap-bolting was his intention. Zack Smith chimed in with, "You know that people will be very upset if you place your bolts on rappel, right?" Lama's response was "I can take it."

Before coming to Patagonia last season, Lama said in a Redbull interview, "Back in the days of old school mountaineering only conquering the peak was important - not so much how this goal was reached. To make it to the top, pitons and even ladders were used. Daniel and I want to make it without any sort of aid." It is ironic then that he doesn't feel capable of establishing the new terrain on lead, and instead plans to rap-bolt it. It is also ironic that Lama is only capable of rap-bolting Cerro Torre's headwall because of the A0 bolt ladders in place on the Compressor Route - To rap-bolt the headwall without the Compressor Route bolt ladders, Lama would have to first climb Cerro Torre by a difficult route or get dropped on the summit by helicopter. It is a shame that Lama lacks the confidence in his skills to attempt his project in clean, alpine style.

When I first heard that Lama's expedition had abandoned plans to fix ropes up the Compressor Route I was very pleased, and indeed even excited for their project. Sadly, these feelings disintegrated when I learned of Lama's plans to bring Cerro Torre down to his level by rap-bolting the headwall. I personally have nothing against rap-bolting at a sport-climbing crag, but I would've hoped that every climber in the world could see the difference between Cerro Torre and a sport crag. This ethical dilemma has nothing to do with differences between North American climbers and European climbers. The ground-up ethic is perhaps even stronger today in Europe than in North America, with many climbing areas strictly allowing only routes established on lead (famous examples being the Ratikon, or the South Face of the Marmolada).

So this, apparently, is the much-anticipated courage and vision of gym climbers applying their skills to the mountains.
Posted by Colin at 1:44 PM